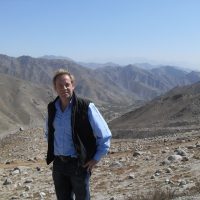 When Dan Browne prayed for God to send aid workers to Afghanistan following the September 11 attack, he didn’t expect to have to pack his own bags.

In the aftermath of the 2001 terror attacks, a horrified Dan joined in prayer with members of the Cheltenham church where he worked, asking that God would send people to Afghanistan to start rebuilding the community there.

He said: “I hadn’t meant that God should send me, but I suddenly realised I could go and it became clear that was what God was calling me to do.”

Dan was accepted to Medair, a disaster relief agency, and spent a year in Kabul, helping to keep the community running by rebuilding schools and helping with refuse collection. He then took the decision to move into the north of the country and to set up his own charity. His faith prompted him to build hospitals and clinics, build wells and try to restore a sense of normality to the Afghans that he met. After a period of nine years living among the Afghan people and sharing his faith with them, he took a sabbatical and came back to the UK where, as Associate Minister, he helped to start a new church, Mariners Church in Gloucester.

At the age of 49, he is now preparing to be ordained deacon in a special service at Gloucester Cathedral on Saturday 16 July at 11am. The first step into ordination, which Dan and six other men and women will take on this day, is to become a deacon. It will give them the authority to do certain things in the name of God and the Church.

Dan said: “He’s taken me on a journey to become more like Jesus. I try to be as much like him as I can and to do the sort of things that he did. My strongest desire and calling is to connect other people to Jesus so that they may have the same joy and hope that I have in being with him.”

Once Dan is ordained, he will be working with the church in Newent and Gorsley with Clifford’s Mesne. Six other men and women will be ordained deacon at the service – all have completed several years of training at theological colleges around the country.

In addition, ten people will have a life changing experience on Saturday 15 July, 3pm, when they will become priests for the Church of England in and around Gloucestershire.

The new priests have already been working in churches and communities throughout the Diocese as ordained deacons, learning the work of a priest. The service in the Cathedral is the next step for the new priests after years of training. The Cathedral will be packed with people from churches and communities across the Diocese, and friends and family of those being ordained

The ten people being ordained as priests are:

The Bishop of Gloucester, the Rt Revd Rachel Treweek, will lead the ordination services. She said: “It will be an immense privilege to ordain each of these unique people to their new ministry as they continue to follow God’s path for their lives, and seek to be and share the good news of Christ’s love and hope.”

2 thoughts on “Afghanistan mission was step on path to ordination”