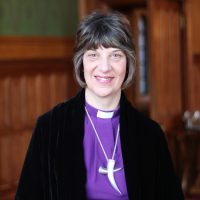 ‘Do not be afraid’

The angel said to the women ‘Do not be afraid’ – it seems to be what angels always say. It reminds me of Christmas. Remember the Angel Gabriel appearing to Mary and saying ‘do not be afraid’. And then on the night Jesus was born there were the angels appearing to the shepherds. They were terrified but the angels told them not to be afraid.

And it always seemed to happen when people were going about their business as usual. Angels would appear and announce unexpected change: A young woman being told that she was going to give birth to the Son of God; shepherds being told that the Saviour, Christ the Lord, had been born and was lying in a manger…

All rather shocking. All unexpected. All rather terrifying. All very well for angels to say ‘Do not be afraid’.

Well quite frankly, since last Christmas there has been quite a lot of unexpected change, and there’s been plenty to make people afraid. Actually, I wouldn’t mind an angel or two…

Article 50 has been triggered, and debates and opinions on Brexit continue apace and no one really knows what it’s all going to look like. Donald Trump is now the president of the USA and rather a lot seems unpredictable…

We find ourselves in a chapter of history which was unexpected – we certainly didn’t feel prepared for all this.

And then what of the shocking atrocities which we continue to see as fellow human beings who are intent on destroying others who are different from themselves.  One minute someone is walking over Westminster Bridge, or entering a department store in Sweden, or going with their family to worship at a service on Palm Sunday in Egypt, or playing outside in a Street in Syria – and the next minute life has changed forever. For many, life on earth has come to an abrupt end.

So much unexpected change can make us quite fearful…

This Holy Week I’ve been with a number of people who have shared stories in which uncertainty, change and fear have featured quite highly: women in prison; refugees and asylum seekers; vulnerable mothers; the elderly …

We live in a world in which many long for life to be different whilst others are fearful of what change might bring.

So in all of this, tradition can be very reassuring. Here we are on Easter Day, and although the date might change from year to year many things are reassuringly the same: chocolate eggs, Easter bunnies and egg hunts (regardless of whether or not they have Easter in the title)…

But there is of course a paradox in all this because on Easter Day we celebrate dramatic unexpected change – Change stronger than death itself.

Just three days ago it was Good Friday and many Christians took time out to pause at the foot of the cross in those hours leading up to 3 o’clock – the time of Jesus Christ’s death by crucifixion. Once more we heard the voice of that Christmas baby – except now not a baby and now not in a manger. Now a man and strung up on a cross. And as we remembered Jesus being tortured and crucified we recalled his voice crying out ‘Father, forgive them for they don’t know what they are doing.’ And we heard Jesus cry out to God the Father ‘My God, my God why have you abandoned me.’ And then the words ‘It is finished’ as Jesus gave his last breath and died. We really could have done with an angel at that point saying ‘Do not be afraid.’

This was not the way Jesus’ friends had thought their adventure with Jesus was going to turn out. This was unexpected change that left them fearful.

But now today it is Easter Day and we are invited to recall the unexpected change of that first Easter morning – and once more it has been utterly shocking. The women have gone to the tomb where Jesus’ body was laid.  They are sad and grieving, but they weren’t expecting to be shocked by an earthquake or an angel of the Lord appearing, dazzling their eyes with brightness, and rolling back the stone from the mouth of the tomb. Hardly surprising that the guards at the tomb are terrified. And of course as angels do, the angel says ‘Do not be afraid.’   How can you not be afraid? Then if all of that wasn’t hard enough to take in, the angel tells the women that Jesus is alive – that he has been raised from the dead – and what’s more they will soon see him.

And in this place of unexpected change the women’s fear becomes joy and they run to tell the other disciples that Jesus is alive. But before they even get there, the women meet Jesus.

And the voice of that man on the cross is heard once again. No longer a baby in the manger; no longer the man crying out as he is brutally murdered on a cross – now a man speaking warm words of greeting to his friends.

That Christmas baby, Good Friday victim, and risen man, is none other than God. Death has not had the final word. And we are told that the women fall at his feet, literally taking hold of them – clinging to him as they worship him.

This is unexpected change. Surprise beyond belief. And what does Jesus say? ‘Do not be afraid!’

I don’t know what is going on in your own story at present. Perhaps like others across the world you are longing for change. Or perhaps you are living with the fear of what change might bring …

Well, look at the empty tomb.

On this Easter Day may we open our hearts to our God who invites us to discover that in our ever-changing world, hope is stronger than despair and life in Jesus Christ is stronger than death. Easter Day has ensured change beyond our imagining – and one day, all will be changed, but for good not evil. One day all will be made new and pain and death will be over. Do not be afraid. However life might look, death, darkness and despair are not the end of the story. And nothing will change that empty tomb.

It’s why the voices of the Christmas angels not only said ‘Do not be afraid’ but they also sang of good news – even for our Christian brothers and sisters in Egypt; even for those whose lives have been changed by atrocities committed by fellow human beings; even for those who are starving, or those who are desperately ill. The hope and life of Jesus Christ is stronger than death.

And although it might sound strange, I hope that today on Easter Day we will remember those Christmas angels singing ‘Glory to God in the highest and peace to God’s people on earth’…

All has changed because God’s love and hope is unchanging. Do not be afraid…