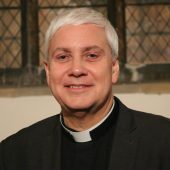 Bishop Robert has this week become a trustee of The Gloucestershire Gateway Trust, along with Bob Allen, Chair of the Matson, Robinswood and White City Community Partnership.

The Trust, which celebrates its 10th anniversary this year, forged a ground-breaking partnership with the Cumbria-based Westmorland Family which led to the opening of Gloucestershire’s award-winning M5 Gloucester Services in 2014.

As a result of this partnership, local communities and charities will benefit from a share of the motorway Services’ royalties (a proportion of the sales) for at least 20 years.

Mark Gale, Chief Executive of the Trust said: “We are delighted to welcome two new trustees to the Board who are joining at a very exciting time when we are beginning to see the tangible rewards for our local communities which we were aiming for all along.”

Bishop Robert commented: “As a new resident of Tuffley, I am delighted and honoured to have been invited to join the work of the Gloucestershire Gateway Trust with its deep and exciting commitment to supporting the community here and in Matson, White City, Podsmead and Stonehouse. I look forward to contributing to a charity committed to changing and improving the lives of all who live here.”

The Gloucestershire Gateway Trust has just handed over the first £10,000 royalties donations to each of its six community partner organisations: All Pulling Together (APT) in Stonehouse, Fair Shares, GL Communities, Gloucestershire Wildlife Trust, the Nelson Trust and Play Gloucestershire. They will each receive another £10,000 later this year, and £20,000 a year for the foreseeable future, making their work supporting local people and the environment more sustainable.

The Trust also funds two community support hubs – Matson Gateway in Gloucester and All Pulling Together in Stonehouse – as well as funding pre-work training for long-term local unemployed people to give them a better chance of finding work at the Services.

In addition, the Trust funds the Growing Communities project on the Northbound M5 Services which has seen the planting of thousands of native trees and a community orchard.