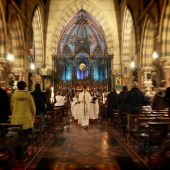 Church communities are being urged to address the issue of domestic abuse and raise awareness of its impact on adults and children.

The updated practice guidance and policy from the House of Bishops, published today by the Church of England, encourages churches to become places of safety where domestic abuse is taken seriously, survivors are believed and respected, and alleged or known perpetrators challenged. The updated document reflects legislative and other changes since the 2006 guidance*.

Under the policy, Church leaders and Officers working with children, young people and vulnerable adults will be expected to undergo domestic abuse training with the issue being raised in appropriate contexts within church life including youth groups, marriage preparation and ordinand training. They will also be expected to work closely with statutory and other specialist organisations.

Also published today is the new House of Bishops Promoting a Safer Church policy statement which sets out the Church’s commitment to making the church a safer place for all. This is a standalone policy statement, which was previously part of a wider document. Updated practical guidance to support this  will be published later in the year.

This policy and guidance applies to all Church bodies and officers and under new legislation  all authorised clergy, bishops, archdeacons, licensed readers and lay workers, churchwardens and PCCs must have ‘due regard’*to safeguarding guidance issued by the House of Bishops.

The Bishop of Bath and Wells, Peter Hancock, lead bishop on safeguarding, said: “The Church remains committed to those who have been survivors/victims and to addressing processes that lead to domestic abuse. In all its forms domestic abuse is contrary to the will of God and an affront to human dignity. All need to play their part in preventing or halting it. This is underlined by the commitments in the House of Bishops policy statement, part of the ‘whole Church’ approach to safeguarding providing consistent policy and practice. ”

You can read all of the named documents here –

*A duty to have ‘due regard’ to guidance means that the person under the duty is not free to disregard it but is required to follow such guidance unless there are cogent reasons for not doing so, (”cogent” for this purpose means clear, logical and convincing). Failure by clergy to comply with the duty imposed by the 2016 Measure may result in disciplinary action.

‘That this Synod, noting that domestic violence is regarded by the Home Office and the police as a crime:

(a)    view with extreme alarm the number of incidents being regularly reported, as being an unacceptable picture of suffering and abuse;

(b)    call for national guidelines to be issued by the Archbishops’ Council for those with pastoral care responsibilities, as to the appropriate relationship with both victims and perpetrators;

(c)    recognise the special circumstances associated with domestic violence, and therefore the special needs of victims, in minority ethnic communities; and

(d)   urge all dioceses to consider ways in which they could i) work in partnership with other agencies, co-operating sensitively with those serving minority communities, to provide the resources needed by victims and their families; ii) speak out against the evil of domestic violence; and iii) work for justice and safety in the homes of this nation.’