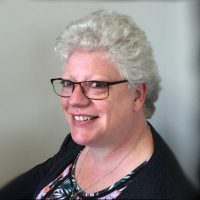 On 26 March, Judith Knight, Head of HR and Safeguarding at the Diocese of Gloucester, and Peter Clark, Chief Executive of Oxfordshire County Council became Honorary Lay Canons. Dermot McNiffe, the Principal of All Saints’ Academy, Cheltenham, became an Ecumenical Canon.

On Palm Sunday (9 April), the Revd David Russell Area Dean of Wotton Deanery and Rector of Charfield and Kingswood; Wickwar, Rangeworthy and Hillesley and the Revd Jonathan Perkin, Vicar of the Parish of Churchdown, will be installed as Honorary Canons.

A Canonry is given by the Bishop in recognition of significant service in the Diocese. Canons become one of 24 members of the College of Canons who work to strengthen the links between the Bishop, the Cathedral and the parishes and to enrich the life of the Diocese.

Judith Knight said: “It is an honour to be included in The College of Canons, a body which exists to consider, champion and support Cathedral affairs.  Excitingly it also has the task of electing any new bishops.  It was a great pleasure for me to support the Cathedral and to get immersed in the business and challenges of Cathedral life during its vacancy before Emily Shepherd joined as the new Chapter Steward.  We continue to find creative ways in which to work in partnership across Cathedral and Church House offices – for example there is a joint working agreement for HR and Safeguarding, ongoing management support, some joint training opportunities – and there are more plans in the pipeline.

Jonathan Perkin, the Vicar of St Andrew’s and St Bartholomew’s, Churchdown said: “It is a pleasure and an honour to become a member of the College of Canons. Having served in the Diocese for nearly 12 years, it is particularly appreciated to be invited to join this College. I trust I can be a worthy ambassador and a faithful supporter of the Cathedral.  The Church of England is at a critical time in its witness to the nation, so my prayer is that I can bring the glorious gospel of Our Lord Jesus Christ to a needy world in whatever way I can.’

Peter Clark, the Chief Executive of Oxfordshire County Council said: “I am a committed Christian with a commitment to use my skills to further the exciting ambitions of Gloucester Cathedral as a relevant place of worship and a place that speaks to all visitors about its proud heritage. Becoming a Canon is a great honour and there is also a responsibility to use all my skills in the service of this great Cathedral.”

The new Canons will be collated by the Rt Revd Rachel Treweek, Bishop of Gloucester, and installed by the Very Revd Stephen Lake, Dean of Gloucester, on Sunday 26 March/ Sunday 9 April both at 3pm in Gloucester Cathedral.