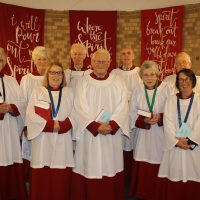 Roger Western will celebrate 84 years singing with the church choir at St Andrew’s and St Bartholomew’s, Churchdown this month.

He joined the church choir in 1934 when he was just six years old and has been committed to the choir for nearly eight decades, with a short break while he was in the navy. He will be 90 on 6 October.

He said: “I joined the choir in 1934 but as I was only about six at the time I can’t really remember much about it in those days. It was seen as quite something to be chosen as one of the 12 boys and six probationers in the choir. We were paid six shillings a quarter which seemed quite a lot of money at the time.

“I left the choir for a short time when my voice broke and spent some time in the navy, but I re-joined the choir in the early 1950s and have been singing with them ever since.”

Roger is a firm believer in the value of singing as a group. He said, “Being in the choir has given me a real sense of comradeship and fellowship – I generally get on well with everyone and we’re a happy bunch of pilgrims. Having a choir makes a real difference, particularly to weddings and funerals and many people comment on how nice it is.”

The choir has changed a lot over the years and Roger still has fond memories of earlier years. He said, “I still much prefer singing the old hymns, the way we used to do it. I’ve known every vicar since the church was consecrated and I can name them all in order. I have never known the church to be as thriving as it is today. Jonathan Perkin, our current incumbent, must have something to do with that. He preaches a brilliant sermon! I’ve not listened to lots of sermons over the years, but with Jonathan I listen to every word. He does quite a good line in comedy!”

And has sitting in the pews for so many years helped Roger in his Christian journey?  He said, “I’ve always had a conviction that there’s more to life than self-interest and I think Christianity is the best hope and best belief. I’ll have to wait and see what happens when the time comes!”