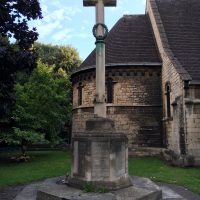 As part of Cheltenham Borough Council’s ‘Cheltenham Remembers’ project to commemorate World War One, the council is supporting the restoration of St Peter’s war memorial at The Rock, Tewkesbury Road.

Work begins on Monday 9 October and will see the memorial cleaned, letters re-carved and damaged stones replaced. Historic England will be visiting the site to film the cleaning process which will then be available to watch on their website.

Funding for the project has been secured from the War Memorials Trust, the council’s Community Pride fund and the Diocese of Gloucester. The restoration is being carried out by SSH Conservation and managed by David Odgers, who led on the restoration of the war memorial in the Promenade.

Sharon Macauly, project administrator from The Rock youth work charity, says: “Over the last few years The Rock has organised a community Act of Remembrance at the war memorial. It has given young people who are supported by The Rock the opportunity to take part and space for them to reflect on those who serve and give of themselves for our country.

“Young people from Gardner’s Lane, All Saints Academy and St George’s Centre have come and joined us along with ministers of local churches and representatives of local community groups. Many people in the local community with whom The Rock connects have come along too, so it is good that funding has been secured to restore the memorial so it can continue to be of significance to our community for years to come.”

Councillor Rowena Hay, who is involved in the Cheltenham Remembers project, continued: “I’m pleased that we’ve been able to help fund the restoration work at St Peter’s. The work will help safeguard the memorial as a focus of commemoration and remembrance for the community so that generations can continue to pay their respects.”