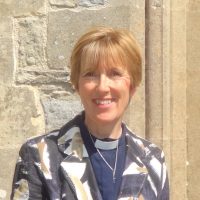 The tension in the international air is a concern to us all, as the technology to produce nuclear missiles advances at a pace that isn’t mirrored in the wisdom of those with power to deploy such missiles.

I have an old study Bible that has been a faithful companion of my ministry for over 30 years. It’s one of those Bibles that has the words of Jesus identified in red. That’s not always very helpful, but it does show me how much of the gospels, as they are recorded for us, are full of talking. They weren’t always easy conversations by any means.

During the summer I led a group of students and staff from All Saints Academy to our partner Diocese of Western Tanganyika in Tanzania. People asked what we were going to do. On one level we were going to visit other schools and lead sports programmes. But what we had really gone for –  was to talk. My lasting memories of this very successful visit are of teenagers from Cheltenham and Tanzania sitting together in the evenings over a bottle of Coke and a game of cards, talking to each other.  There was the difficulty of limited English, a vast cultural divide, and a strange environment, but it was the talking together that led to the transformation of these young people’s lives.

For Jesus it was never too late to talk. He talked to others right to the moment of his death. At the time of the resurrection he was identified by Mary, not in his appearance, but by his talking.  Trump may think that ‘it’s too late to talk’ but I hope for us as Christians, whatever the difficulties, we’ll always be seen as people who talk.

By the Revd Canon Helen Sammon

CMD Officer, and Vicar of the Highnam Benefice