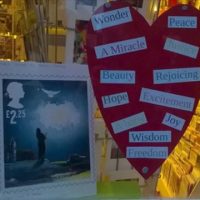 ADVENTure Calendar takes to the streets in Newnham

The idea of the traditional advent calendar is being transformed along Newnham High Street, where neighbours are converting their home windows to creatively retell the Christmas story.

Organised by St Peter’s Church, a new window is revealed each day in the lead up to Christmas, and displays a scene based upon a 24 verse poem, ‘First Christmas,’ written by curate, the Revd Joe Knight. ‘The big idea,’ he said, ‘is to help the community celebrate and engage with the Christmas story in a fresh, creative and fun way. People have thought so hard to create really meaningful, beautiful and humorous windows. Advent is an adventure, a journey towards hope, and together, we are creating a journey through the high street, spreading joy, love and hope as we go.’

Jane Curtis, taking part in organising and window hosting, said ‘I was thrilled at people’s response when they were asked to join in with the project, Many were fired up to be creative, and everyone likes the idea of the BIG ADVENTure CALENDAR!’

Small groups of children and adults wait for windows to be revealed at 4pm each day, and maps are available from the local Post Office for those who want to visit the advent windows currently on display. The final window will be opened in St Peter’s church during the Crib Service on Christmas Eve, 4pm, where the ‘First Christmas’ poem will be read in full. The ADVENTure windows will be on display until 6 January.