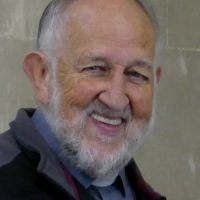 Hugh Broad, born in 1937 in Cheltenham, attended the local Leckhampton School. As a keen chorister at St Peter’she remembers singing at weddings and being paid for it!

The family moved to Shropshire and young Hugh studied agriculture at the local college gaining a diploma in agriculture.

It wasn’t long before Hugh became a trainee farm manager tending to cattle. It was at this point that he joined the local church and he realised that his vocation was in the ministry.

Having studied theology at Durham and Lichfield colleges he was ordained as a priest in 1968.

Following his ordination he trained as a teacher and was soon back in the classroom, for a short spell teaching RE and English at Bishop of Hereford’s Blue Coat School.  Not long after this he was asked to take on the parish of All Saints in the city centre.

In 1988 he married his wife Jackie and soon after his twin daughters Lucy and Hannah were born.

By this time Hugh and his wife had moved to the parish of St Katharine’s in Matson where his wife ran a successful lunch club and Hugh set up the Matson Neighbourhood Project.

In 1997 Hugh was moved again to St George’s in Tuffley and there he helped set up a local ministry team.  As a member of the General Synod and Canon of Gloucester Cathedral it wasn’t long before the church was calling him again for another mission.

In 2003 he became Chaplain of Costa Almeria and Calida in Spain and soon after Area Dean for the Gibraltar Archdeaconry. Being a large area Hugh and his wife soon found themselves travelling to Spain, Portugal, Maderia, Morocco and Andorra!

It wasn’t long before the church appointed Hugh to be Honorary Canon of Gibraltar Cathedral.

In 2013 it was time to ‘retire’ and Hugh and his family came back to Gloucestershire making their home in Quedgeley. However, far from retiring, and hanging up his robes, Hugh is seen walking around the parish, visiting parishioners, officiating at local church services and taking assemblies at local schools.

Hugh and his wife are keen travellers; both enjoy sea cruises and over the last few years have visited a number of countries.  Age for Hugh is just a number!

Hugh says  “Although  I am now an octogenarian I thank God constantly that I still have sufficient energy both spiritual and physical to do what I gave my life for half a century ago!”