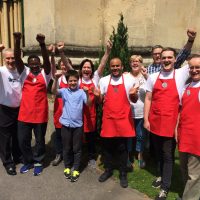 Eleven toilets have been ‘twinned’ in Cheltenham, following the fundraising efforts of a group of confirmation candidates.

Toilet twinning is an initiative where people can donate £60 to help fund a ‘twin’ toilet for someone in desperate poverty.

One of the sessions of the course was about justice, and course member Sara Hicks floated the possibility of doing some toilet-twinning. This project was just what the group needed to give it focus once ‘Life on the Open Road’ had finished. We identified Sunday 10 June 10 for a bacon butty morning at Christ Church, aiming to raise £660 to twin all eleven of Christ Church’s toilets.

In the end, the group was exhilarated by the response: the Christ Church congregation responded very generously, and the target was smashed – an incredible £991 was raised. The group is pictured just after this total was announced. Two members were confirmed by Bishop Robert on 12 May, and two more were baptised by full immersion on Saturday 16 June 16.