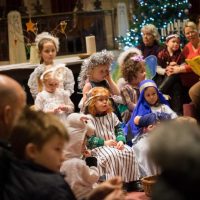 The latest annual Statistics for Mission report shows that while traditional Sunday attendance edged lower in 2017, in line with long-term trends, the numbers attending Christmas services increased by 3.4 per cent to 2.68 million.

It was the fourth successive rise in Christmas congregations since 2013 and the highest figure since 2006.  Combined with figures for special services in churches during Advent, including carol services, there were nearly eight million attendances over the festive season.

The Statistics for Mission 2017 were published as #FollowTheStar, the Church of England’s campaign to encourage people to attend Advent and Christmas services this year, was launched by the Archbishop of Canterbury, Justin Welby.

Meanwhile separate figures also published today show that the Church of England more than doubled its monthly reach on social media – from 1.2 million in 2017 to 2.44 million this year.

The Church of England’s Advent and Christmas campaign in 2017 was four times bigger than the previous year, with reach rising from 1.5 million to 6.8 million. The ‘Worshipping Community’ – a measure of those people who regularly attend church – rose slightly in 2017 to 1.14 million people, of whom 20 per cent were aged under 18 years old.

The Bishop of London, Sarah Mullally, said: “We live in an age of rapid social change affecting all aspects of life – right down to people’s working patterns and how they spend their weekends. It is really striking to see how churches are responding and evolving in the face of that.

“We are also reaching more people than ever through social media, providing a Christian presence to those who might not otherwise walk through the door of a church.

“And millions encounter the Church in their daily lives, through its commitment to the most vulnerable from food bank provision to night shelters, lunch clubs and community cafes.”