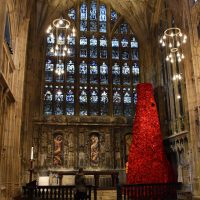 GCHQ’s giant waterfall of handmade poppies is on display at Gloucester Cathedral from 17 October to 26 November 2018 as part of the city’s World War One Commemoration.

The Poppyfall was created by GCHQ staff and friends to launch the Royal British Legion’s Gloucestershire 2016 Poppy Appeal. It was originally on display at the intelligence agency’s Cheltenham HQ and is a testament to their continued support for the military and the Legion.  GCHQ was originally formed to support the military and it is still an important part of their mission as they head towards their Centenary in 2019.

The handmade poppies reflect GCHQ as an organization: poppies made by friends around the world represent the global partners they work with to protect our country; rainbow and black poppies reflect the organisation’s diversity that includes people from a wide range of backgrounds and 3D printed poppies represent their technical status, always innovating to stay ahead of the latest challenges.

In 2018, the Royal British Legion is leading the nation in saying “Thank You” to all who served, sacrificed and changed our world. One hundred years ago the guns fell silent on the world’s first truly global war. The Legion is asking everyone to think about all of those who lived through this tragic and remarkable time – and who put Britain on the path to becoming what it is today.

A spokesperson from GCHQ says “It’s time to say Thank You for all they did for us and GCHQ is proud to be collaborating with the Legion once again as part of this Commemoration”.

The Poppyfall is central to Gloucester Cathedral’s programme of Centenary events.  The breathtaking installation promotes thoughtful reflection on remembrance both now and beyond the 2018 Centenary. The impact of the piece inspires us to give thanks for all that we have and encourages us to embrace and support our neighbours, living together with tolerance and understanding.

A space for quiet remembrance and contemplation can be found year round at Gloucester Cathedral in its Memorial Chapel which is dedicated to all those who have lost their lives in the armed forces.