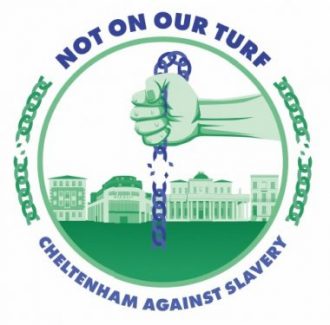 Churches and other community leaders across Cheltenham are backing a campaign to bring an end to modern day slavery and human trafficking.

The organisers of ‘Not on our Turf’ are inviting individuals, organsiations and businesses to sign up at www.notonourturf.org in support of five pledges:

•We believe life is a gift – everyone deserves to be free from the exploitation of modern day
slavery and human trafficking.
• We support all efforts to create awareness and to eradicate modern day slavery and human
trafficking in our community.
• We will do whatever we can to help support victims.
• We commit to look, listen, ask questions and act.
• We commit to a slave-free Cheltenham!

Supporters can also follow regular twitter updates @nootchelt.
One of those supporting the campaign, Rev Andrew Blyth, Rector at Trinity Church Cheltenham, said: “We’re not against any kind of legitimate business or people having fun. We just want to support our local police and all those working against modern day slavery, by raising awareness of the issues and showing that we stand together against any exploitation of people in our town.”

The campaign has been welcomed by Alex Chalk MP who said:

“It is hard to comprehend that the sickening and depraved crime of slavery still lurks in the shadows of our society, and even in places like Cheltenham. It is one of greatest human rights issues of our time. Our country is leading the way internationally in defeating modern slavery, with the Modern Slavery Act, the first legislation of its kind in Europe. Let us rededicate ourselves here in Cheltenham to ridding our community of this evil. And let us preserve and protect the freedoms and values that have defined our society for generations.”

“Human trafficking can take many forms and involves victims from all over the world and the UK – trafficking includes moving people within the country as well as from outside. We have had several high profile investigations in the past in Gloucestershire involving sexual exploitation that show it can happen anywhere. Our recent action has been about getting the message out there that this is happening, gathering intelligence and making sure people and businesses can recognise the signs. We’re still gathering information about the extent of the issue here and we would of course urge people to call us if they have any suspicions.”