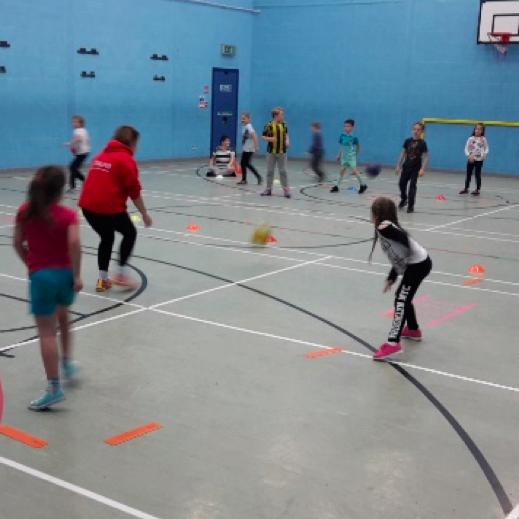 In October half term, churches in Cheltenham came together to run a non-residential multi-sport camp for the first time in their local area. This was held at the Oasis Centre and was for primary aged children.

For the children that came along the opportunity to have fun playing loads of different sports was one of the real highlights of the camp. One child commented, “I’ve loved trying lots of different sports because it means we have never been bored”. When kids don’t want to leave at the end of a camp it’s usually a good sign! Over the course of two days one child pointed out that he had tried nine different sports which he thought was pretty good going!

The team consisted of local church volunteers who were supported by several staff members from Scripture Union and PSALMS. The aim of the camp was to help the local church connect with children in the local area who they may not have had previous contact with as well as to build upon existing relationships within the community.

It was also hoped the camp would provide a platform for ongoing work in the local area which might give opportunities for the language of faith and sport to interact naturally together in the future. Across the two days a total of 23 children attended the camp who had the opportunity to enjoy a variety of sporting activities which helped us think about the overall camp themes of honesty and humility. We looked at how Jesus modelled both of these characteristics during his life and how this may/ may not have any relevance for us today.

The children were split into camp teams (or countries) during the day and had the opportunity to score points for demonstrating the character value of the day, working together well as team and performing well in the sport. The idea of the camp was that the overall theme should be explored throughout the day both practically during the sports and also in ongoing conversations, video, sketches, personal stories and bible studies during team times.

To round off the camp there was a closing ceremony where the children heard a testimony from one of the sports coaches about how God had taught them lessons about humility through their involvement with sport and how a personal relationship with Jesus had become the most important thing in her life.

All in all the two days were lots of fun for everyone (leaders and kids) who attended, with many children getting to try new sports and explore the Christian faith. Importantly the two days were covered in prayer thanks to the local church supporting the camp. New relationships were formed in the local community and the children were able to hear about ongoing groups the church is involved with in the local community. Really encouraging first steps as the church looks to meet people where they are at through the language of sport and play.

Article by PSALMS, in partnership with the Diocese of Gloucester.

Secretary of State for the Environment to the Cotswolds Conservation Board

This weeks message from Bishop Rachel

Weekly Bulletin and roundup: sermon and podcast for August 2.