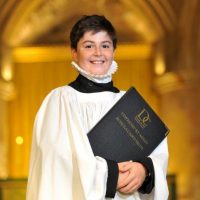 Cassian Pichler-Roca, age 12, was announced winner of the boys’ category of the BBC Radio Two Young Choristers of the year competition. Cassian made it through two rounds of recorded auditions to the finals alongside three other young singers from school, church and Cathedral choirs in the UK. The final was hosted by Blue Peter presenter Radzi Chinyanganya at the BBC Philharmonic studio at MediaCity, Salford.

To enter the competition each chorister had to choose and record a solo piece of sacred music and a hymn. For the final, Cassian chose to perform Light of the World by John Dankworth and the hymn Christ triumphant. Cassian was complimented by the judges who said his performance was confident, controlled and focused. This year’s judges were composer and conductor, Bob Chilcott (Chair of Judges); Caroline Redman Lusher (Singer/Musician and Founder and Director of the Rock Choir) and Simon Lole (former organist of Salisbury Cathedral, composer, vocal coach and Musical Director).

Cassian has been a chorister in Tewkesbury Abbey Schola Cantorum for just over four years, and he also plays the violin and the piano. Cassian said. “It has always been a dream of mine to enter BBC Radio Two Young Choristers of the Year, I was inspired by former Dean Close pupil Laurence Kilsby who won it in 2009 and I always hoped I would have the opportunity to take part. To win is an incredible achievement, everyone was so brilliant, they all sang so beautifully. I am absolutely delighted to have won and can’t wait to take part in all the activities Radio Two have in store for me, including recording with the BBC Philharmonic Orchestra.”

Simon Bell, Director of Schola Cantorum and Director of Choral Music at Dean Close School said, “I am immensely proud of Cassian, in fact everyone at School and within the Schola Cantorum are. He has worked incredibly hard and is a valuable member of the choir, always performing to an outstanding level. Winning this award will hopefully inspire other boys to consider Choristerships, which offer children so much more than just a first class musical education. Being a Chorister means they not only learn to sing to a professional level, they also learn valuable life skills such as team work, organisational skills, resilience and a sense of responsibility. Winning this award acknowledges the excellent work Cassian not only does in the choir but all the skills he is developing as part of his chorister journey.”