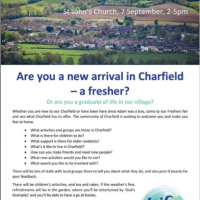 Charfield has had so much new housing recently, that we decided to put on a Freshers’ Fair, just as a university would for its fresh intake of students. Twenty village organisations put up stalls to introduce themselves to newcomers. Lots of goodwill built up, and a number of groups made new recruits! Two church members, Sue Thorne and Simon Farmer, came up with the idea of a “Freshers’ Fair”, based on the example of those held by universities at the start of a new academic year to welcome new students and let them know what clubs and societies exist in the university. We would try to get together as many village community organisations under one roof as possible, and invite the whole village, but particularly new residents to attend.

Of course, there was an element of an ulterior motive… we were quite keen that the roof in question should be our own, to get across the message both to new residents and existing community groups that St John’s was a church with some energy and a significant player in community life. Although we toyed with various dates, the end result, based on the time needed to organise, the timing of people moving into the second new estate and the attempt to link to the notion of a “Freshers’ Fair”, was 7th September 2019, roughly coinciding with the start of a new academic year. We floated the idea to as many village organisations as we could think of, and were overwhelmed with the positivity of the response. Nobody said “no”, a handful didn’t respond, and the rest were very enthusiastic. It was clear the idea was a goer! In the event, twenty groups took part. The village hall (as you might expect) did come up with a counter-proposal that they should stage it… however, it just happened that they were undergoing a major refurbishment in September anyway, and they backed down gracefully and came to us! We had some experience of this sort of event, as we are used to hosting out-door cream teas with a marquee, and an indoor “Christmas Fair”. By a happy coincidence, the number of community groups wanting to be involved was exactly the same as the number of stall-holders we are used to accommodating at a Christmas Fair, so we only had to repeat the same layout. Similarly, the refreshments could follow the same pattern as the cream tea. Had the weather been bad and we had had to move the refreshments indoors, space would have been cramped, but happily, we had good weather. We are used to leafletting the whole village for Christmas events, and did the same for this. 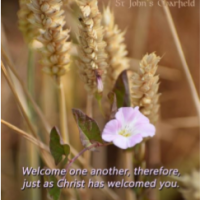 So, with the logistics being essentially those we knew already, the main challenge was to ensure that our own presentation was good. So a lot of work went into producing graphics for the event. These including some enormous printed vinyl banners on the theme of “welcome” which we decorated the church walls with, and the stall itself. For this we produced a series of panels with bullet points about different aspects of the church, and a leaflet following the same pattern, but with information amplified in more detail, all illustrated by photographs. We also produced a survey to find out what people’s experience of the church was. We had a few giveaways. We ran a cake stall, with excellent cake, free or for a voluntary donation. We had also invited a local Christian band to play, which they did to those who were eating refreshments outside. We made sure had some toys for children to play with. In the event, these proved crucial. A high proportion of those who attended were young families, and by keeping the children entertained with the toys I was able to engage with their parents or keep the children happy whilst other church members did so. In the event, we gave the message that St John’s welcomes children. 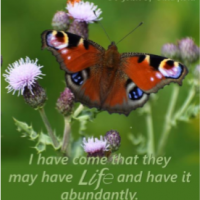 So, what happened? In the event, attendance figures were low. We had no mechanism to precisely measure attendance, but we did speak to pretty much everybody, and the consensus is that we had not more than twenty genuine “public” (i.e not counting stallholders), considerably fewer than those we were hoping for. This does not mean that the event was a failure. Most of those who came were just those we were aiming at… the newly-moved in. They all enjoyed with the event and engaged with the stall-holders, and stayed for a surprisingly long time. We had some very good encounters ourselves, including some who said they would come to church. Two left offers to help with events as part of their feedback to our survey, and it looks as though this will at the very least bring some new blood into some of our social activities. I got feedback from a number of the other groups present that they had also recruited volunteers or participants. There was a good interaction between the stall-holders themselves, and we generated a lot of goodwill from them for the church. The whole feel of the afternoon was positive and friendly, and people were very appreciative of us taking the lead to make the event happen. The publicity around the event has generated positive feedback even from those who were not there. 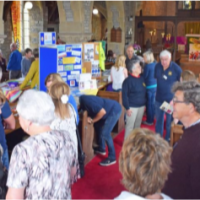 With hindsight, to have got more people in I think we would have needed a more “glamourous” event… bouncy castles, fun events, etc. Last year, with a mediaeval festival, we attracted several hundred. But I don’t think we would have had the resources to do the larger-scale event this year. Would the model work in other parishes? It is worth considering scaling it to fit different sized communities and potential builds. But in areas with rapid, large development, I think there are things to be learned from our experience. 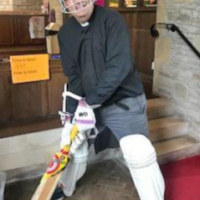 Taking part in the cricket club’s challenge
as to who could put on the gear quickest.
It wasn’t me! I haven’t done it for about forty years.