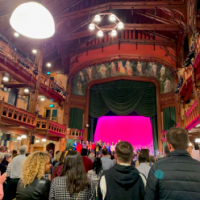 The Christian Arts Festival gives a platform for Christians to express their faith through their God given gifts. By using talent locally, part of the festival’s success is the collaborative spirit of people coming together, unifying in the name of Christ, from Christian Churches of all denominations as they celebrate God and reach out into the communities around them. Collaborative uplifting performances included homegrown worship (recording a live album), Scratch Gospel Choir workshop culminating in a concert, a new contemporary drama and arts/faith teaching packages going into schools and performing in local churches.

Whilst the festival is at heart Christian, it is open to all regardless of whether they are of any particular religion or none, and regardless of race, gender, age or background and encourages and supports interfaith and other faith elements and contributions.

Christian expression of faith is changing. Church attendance shows a decrease in numbers but there is an increase in the numbers of people who wish to express their faith in non-traditional ways. Church surveys suggest that independent churches and fresh expressions of Christian community are growing.Our Festival for 2019 in partnership and supported by the Diocese and Arts Council England provides a means for sharing our Christian arts heritage and offers fresh innovative expressions of faith, in church spaces as well as in neutral spaces. Attendance includes non-church going Christians and those who are curious about the faith. The schools and children packages engaged with at least 1,500 young people fulfilling our aim to stimulate and inspire young people – ultimately the future of our faith and church. 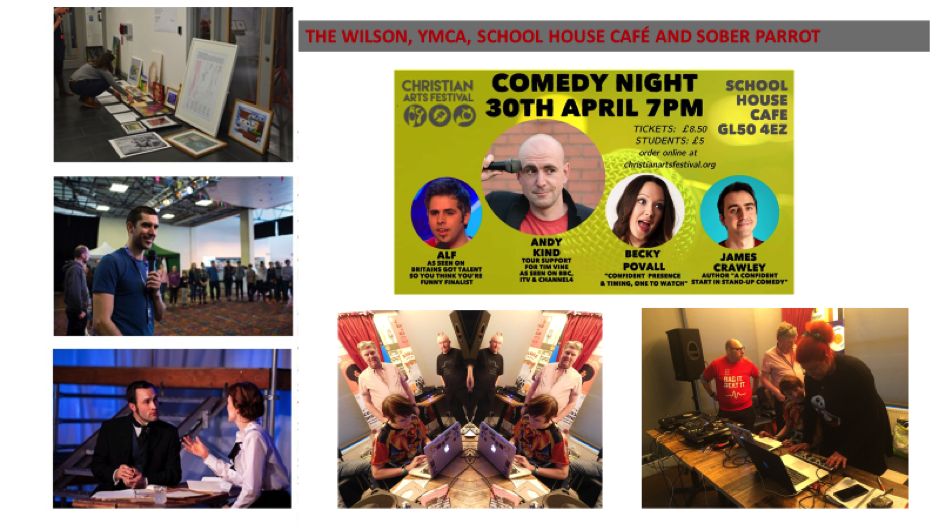 The festival events also include examples of many other partnerships with and through organisations such as the YMCA, the Rock (disadvantaged young people and young people excluded from schools), Family Space (low income families), Art Shape (workshops for those with mental health issues and learning difficulties) and the National Star College (young people with physical disabilities). Cheltenham Christian Arts strongly believe there is a therapeutic and healing benefit which comes from learning new skills in the arts, giving hope of new beginnings and raising confidence and self-esteem.  As witnessed at an event ‘Fistful of DJs’ presented by DJ Collective, young people with learning disabilities, at The Sober Parrott (Nelson Trust for rehabilitating Alcohol and Drug addicts).  This event was to promote their music social held regularly on Thursday nights. They played an eclectic selection of rare grooves and floor fillers for the audience to get toe-tapping and dance.  Even ‘Doodles’ the festival’s mascot dog took to the floor!  (Hugely rewarding to see such smiles on faces stuck into creating music together as ideas bounced off each other,’ Jenny a new steward for the festival).

The Sower: Encounters with Jesus: Festival commissioned drama by new writer, performed by amateur community cast of 15 auditioned and rehearsed in the run up to the festival with 2 well received performances in a church and school. Feedback included:

“Superb, excellent, really enjoyed it. The drama event was thought-provoking and inspirational – wonderful cast so evidently enjoying themselves!”

“On behalf of all the staff and pupils of St. Mark’s C.E Junior School I just wanted to say a huge THANK YOU to both yourself and the Riverside Arts Performing group. The children had a wonderful week and the parents were in raptures about the afternoon performance with lots of ooohs and aaaahs!! Thank you so much for securing the funding to allow our children to benefit from such an amazing opportunity.”

Poetry Slam workshops and performance engaging 160 pupils from three schools, 4Front Theatre performed Fisherman’s Tail for six schools. Our reputation with schools is very strong not only with faith schools but all the secular schools take up our invitation to bring their children to our performances. Feedback:

“I was very impressed with the performance. 4frontTheatre pitched it well for the children, kept it very slick from the very first moment to the last. Everyone was engaged and despite the number of primary school aged pupils in the hall, no member of staff had to correct any pupil”

In partnership with the Diocese of Gloucester, we engaged children from 18 schools (116 invited) in a schools’ art competition, receiving 135 entries.

Workshops ranging from a week long Icon Painting course to iPad Music making and Pyrography for children and a practical workshop on Byzantine music and chanting.

There were talks by experts on a variety of subjects, Tolkien’s ‘Lord of the Rings’ Tom Price Tutor from the Oxford Centre for Christian Apologetics to PJ Crook MBE’s 14 year creation of anew triptych altarpiece for St. Michael’s Church in Cheltenham and our patron Bishop Rachel welcomed Bishop Michael Lewis from the Province of Jerusalem to talk about surprising stories of churches bursting at the seams in the Middle East.

Ten art exhibitions took place across Cheltenham and one in Gloucester in galleries, sacred, and community spaces. Exhibitions ran for ten to fourteen days and included work by C3 Church community (third festival running), and an invitation to a former village church in Bentham now full of Greek Icons.  We provided new art hanging systems in two venues, a church community café and the YMCA where Artshape provided a ‘Raise the Roof,’ art exhibition skills course, open to the residents and wider community, preparing them to curate and exhibition, display, talk about their work at an opening event and sell their work.  The Holy Apostles Community Café plan to hold ‘faith through art’ exhibitions in the future to bring faith from the church into the community space.

“For many of us, this was a different kind of Christian music event from the ones we are used to. Instructive as well as enjoyable and exhilarating.  The venue was ideal, as the presence of a large number of Pentecostalist worshippers helped to bring the experience alive. Such welcoming hosting. Great musicianship and how wonderful to share it, lifting our hearts to our Great God. The acoustic set was very powerful.  And the sheer joy that the band had playing together was good to be a part of.”

“Really appreciate the chance to worship together with Christians from lots of different churches – this is good for us in Cheltenham. I love this festival!”

Service with a Swing by Out of the Ashes combined jazz, gospel and classic R’nB’ to make music that is fresh, fun and lyrically honest in a morning church service. Penny Lyons, their leader, shares her life story led by faith and the belief that everyone can be used by God.  Through to the Soul Sanctuary Gospel Choir as the finale.

“Wow! What an evening! Thank you so much for inviting me along to such a fabulous concert. I really enjoyed the performance. Congratulations on a hugely successful event!!”  ~ Alex Chalk MP

“We had a fab time. The choir has such an impact on people. My hubby, who isn’t easily impressed, was very moved by them and can’t wait for the next concert.” ~ via Twitter

There is always the hope that other towns and cities will use this successful festival as a prototype to organise Christian Arts Festivals themselves at Easter every year.  Until this happens, we will continue to market the festival not only locally but further afield.  We are to look to advertising in media such as Christianity Today and The Church Times for future festivals.