The celebration of the centenary of the founding of Gloucester DAC took place on 21 February – one hundred years to the day after the first ever meeting of the DAC in this diocese.

The DAC is a group which advises parishes on all sorts of schemes, large and small, which affect their church buildings and churchyards. Though most dioceses have such a committee, our DAC was one of the first of its type in the country, and originally founded to deal with a large number of proposals for war memorials in the aftermath of the Great War. To mark the occasion of the centenary, DAC members and advisers, both current and those who served the committee over the years enjoyed a celebratory lunch together.

Bishop Rachel, who could not be with us recorded the video message below for those who attended:

The DAC Secretary Adam Klups said, “We are proud to say that in the 101st year since the founding of the Gloucester DAC, we have one of the best and strongest Diocesan Advisory Committee memberships in the country. Our members and advisers represent a wide range of specialisms relevant to church buildings and churchyards. They all volunteer their time and expertise to help parishes plan and manage their church building projects. Gloucester DAC is stepping into the next hundred years with plenty of energy and enthusiasm.”

We had speeches by the Chancellor of the Diocese June Rodgers, outgoing Chairman Henry Russell and Senior Church Buildings Officer Natalie Fenner (see below for a full transcript of Natalie’s speech), focusing on the past and present work of the Committee, as well as plans for the future. The former and current DAC secretaries Jonathan MacKechnie-Jarvis and Adam Klups prepared a quiz to test our guests’ knowledge of the church buildings in the diocese in a fun atmosphere. The day was also special as the DAC said goodbye to its chairman of 14 years, Henry Russell. The new chair, David Ball formally took over the responsibility for the Committee.

Read more about the work of the DAC here → 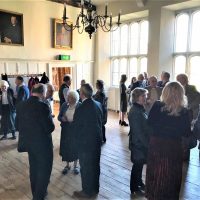 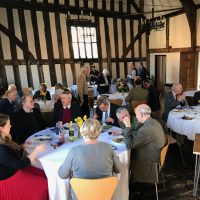 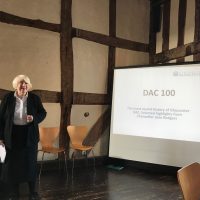 Since its inception in 1919, Gloucester DAC has come a long way.  Starting merely with war memorials, the role of the committee has become much broader to include a comprehensive range of repairs and alterations, with advice now available on everything from organs, bells, clocks and textiles, to liturgy, DDA compliance and sustainability.   The committee too has changed a great deal, from an initial 6 gentlemen meeting at 4 College Green, we are now a mixed committee of 20 supported by a further 8 specialist consultants.  The DAC welcoming its first female member in 1952 Dame Joan Evans, its first female chair in 1998  (Mary would have hated to be called a chair – apparently telling JMJ she was not a piece of furniture on more than one occasion!), first female Chancellor in 1992 and finally its first female DAC Secretary (me) in 2012.  We can very proudly say that we have one of the most distinguished memberships both past and present in the country.  Our DAC is not one of the closed-door old boys clubs that many continue to be, and though this may not often be articulated by the parishes which we serve, we are one of the most forward thinking DACs in the country.  It was this DAC which helped to bring about the first zero-carbon Gr I listed building in the country, it was this DAC which helped to develop the pioneering 3 in 1 project at Horsley, not forgetting of course our pioneering introduction of trench arch which has enabled a large number of remote and rural churches to have flushing toilets…..

The use of churches has changed a great deal over the last 100 years.  At its point of inception, some of the dramatic Victorian reorderings were still relatively new, only undertaken by the previous generation.  Church was still attended by vast swathes of the country as both a place of worship and a focal point of the community.  The formality of worship and hardships of daily life meant that church buildings were fit for their purpose.  As indeed was the DAC.  In 1919 and in the shadow of the Great War, people were looking to their churches to provide permanent and fitting memorials not just to those who had been lost  but also in the hope that the act of remembrance would prevent such dreadful atrocity from happening ever again.  Sadly we all know that was not to be the case and those first inscribed names were joined by others less than three decades later.  The DAC offered advice on providing these fitting memorials, the majority of which have served their purpose and stood the test of time.

100 years later we find ourselves in rather different place. It is unimaginable that those first committee members could have contemplated being asked for advice on solar panels, broadband installations, or toilets.  But in 1919 climate change, internet connectivity and comfort in churches were not high on the agenda. In fact they weren’t on any agenda, and the early committee could also not have contemplated serving a church which finds itself in such a dramatically different social position, attended regularly by less than 10% of the population, often seen as a clique and so often losing its place in the wider community.

Though the advisory purpose of the DAC has not changed, the challenges we face are greater than ever, because the task faced at parish level is larger than ever before.  Creating a church that is ‘fit for purpose’ is constantly evolving and must now juggle an enormously wide range of public opinion via consultation.  Over the 8 years I have been here, I have always been struck by the DACs keenness to promote brave new ideas.  But I have also seen how this doesn’t always go down well with reluctant parishes who often adopt a very conservative approach.  This can be aggravated further by the expectations of church from non-church goers, who don’t really understand church beyond being a location to mark significant life events.  Conservatism is I think one of the greatest challenges we face, and in moving forward we may need to consider offering our advice in a slightly different way in order to engage with wider audiences about what church buildings are for, what is appropriate to take place in them, and what role they must play in the communities they serve if they are to be sustainable in future.

We have many good examples of a fantastic range of things taking place within churches: a community shop, a village cinema, Pilates classes, concerts, children’s sports, art exhibitions and lunches.  But we must continue to strive for more, and help our parishes to put church buildings back at the heart of their communities.

The other key challenges that I think it likely we will face in the coming years will include :

An increasing simplification of the faculty system and more online working

An increasing number of churches coming forward for closure – as the pressure continues to mount on ever beleaguered parishes, I am sorry to say that I consider closure in some cases an inevitability that the Church of England more widely has been putting off for too long.  The DAC may well have a role to play here in thinking more creatively about what purpose church buildings can be put to when worship comes to an end, as well as facing some quite tough decisions about which buildings we fight to save over those which we have to accept to lose.

We will of course over the coming years still have to contend with plenty of loos, and pews being replaced by dodgy chairs.  I would hope we will also see some inspiring new works of art and design which come along every now and again and continue the long established tradition of craftsmanship.  We will have some big re-ordering projects come to pass and it will be hugely valuable for the DAC to reflect on the finished products and to see how these buildings are put into use.  I hope in the next few months that the DAC will be able to see the completed scheme at St Mary de Crypt here in Gloucester which I attended a preliminary meeting about in my first week in the job here.  The success of this scheme will not just be in its architectural detailing, but also in ensuring this complex building has a genuine role to play in the future of the city of Gloucester.

One challenge which I would dearly love to be able to find resolution to in future is one of reputation.  We are sadly the committee that everyone loves to hate.  This reputation is unjustified and undeserved, Because we work extremely hard and offer good and valuable advice, which on an individual basis is often greatly appreciated.   Nevertheless as a somewhat amorphous body, and part of a highly legalistic system (sorry Chancellor!) we are often accused of getting lost in the detail and being disconnected to the mission of the church, something I know not to be true.  We must remain mindful of this perception, and challenge it wherever we can in order to exert our influence more widely.  We will never be loved by everyone, but the fact we are loved by some is a testament that we are doing things right.

On a personal level, I am immensely proud to say I work for the Gloucester DAC and I value the knowledge and experience which you all bring, enabling both the parishes and me to learn from you. This network of support is so hugely important, and sets us apart from the secular planning system.

On our collective 100th birthday I would like to raise a toast to the success of the Gloucester DAC over the last 100 years, and to its future.