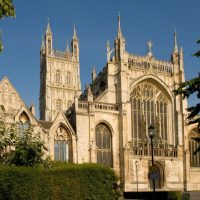 In those days a decree went out from Emperor Augustus that all the world should be registered. 2 This was the first registration and was taken while Quirinius was governor of Syria. 3 All went to their own towns to be registered. 4 Joseph also went from the town of Nazareth in Galilee to Judea, to the city of David called Bethlehem, because he was descended from the house and family of David. 5 He went to be registered with Mary, to whom he was engaged and who was expecting a child. 6 While they were there, the time came for her to deliver her child. 7 And she gave birth to her firstborn son and wrapped him in bands of cloth, and laid him in a manger, because there was no place for them in the inn.

8 In that region there were shepherds living in the fields, keeping watch over their flock by night. 9 Then an angel of the Lord stood before them, and the glory of the Lord shone around them, and they were terrified. 10 But the angel said to them, “Do not be afraid; for see—I am bringing you good news of great joy for all the people: 11 to you is born this day in the city of David a Saviour, who is the Messiah, the Lord. 12 This will be a sign for you: you will find a child wrapped in bands of cloth and lying in a manger.” 13 And suddenly there was with the angel a multitude of the heavenly host, praising God and saying,

14 “Glory to God in the highest heaven, and on earth peace among those whom he favours!”

15 When the angels had left them and gone into heaven, the shepherds said to one another, “Let us go now to Bethlehem and see this thing that has taken place, which the Lord has made known to us.” 16 So they went with haste and found Mary and Joseph, and the child lying in the manger.

The news of the past few weeks has been full of well-known names – and I confess that I wasn’t thinking of the characters in Star Wars or the winners of Strictly. I’ve been rather more focused on the political arena having spent most of last week as the bishop on duty in the House of Lords and attended my second State Opening of Parliament in as many months.

Across the country we have all been living an extraordinary time of political uncertainty and turbulence, a time of division and animosity, and of hopes and fears. And last week when parliament returned after the General Election, many well-known people with well-known names were present, as well as those who are probably only just becoming known beyond the bounds of their constituencies.

And I suspect that across the country there were a whole range of thoughts and feelings as MPs took up their seats and the Government’s proposals were unveiled in the Queen’s Speech last Thursday.

Our gospel reading began with major political activity as people, including Mary and Joseph, responded to that decree ordering a major census for the purposes of taxation, with people having to travel to their ancestral home. It was all down to a big leader with a well-known name at the time – the Emperor Augustus. And in the telling of all this, another significant leader is named – Quirinius the governor of Syria – All rather poignant 2000 years on when we think of all the political turbulence in that part of the world today.

As I spent time in Westminster last week, so very aware of many well-known names and faces, I was struck once again by the responsibility of leaders to speak and act for the well-being of those whose names are notknown in the public realm – those who so often feel invisible and unheard and even marginalised.

It might be the person in front of us in the supermarket queue, or the person behind a closed door in our street or on a local farm; or the person we pass on the pavement or feel irritated by in the street; or the person across the world who has no clean water.

Whatever your political views and your hopes and fears about issues such as the NHS, social care, education, agriculture, housing, security or taxation – All these things are ultimately about all of us  – and that includes those who feel insignificant, forgotten, ostracised or othered.

It was right that in the response to the Queen’s Speech in the House of Lords last Thursday, mention was made of the horrific recent London Bridge attack. Jack Meritt and Saskia Jones were rightly named and remembered as the two young people who were brutally and tragically killed. Yet it is alsoimportant for us to acknowledge our failure to remember and care about those whose names we neverhear but who are also brutally attacked, abused and murdered, both close to home and far away. For example, the two women killed in the UK every week in acts of domestic violence, or the unnamed hundreds killed in Yemen, or the forgotten Christians persecuted for their faith and living in places we’ve never heard of…

It is a sad indictment on us that so often we let the media shape our perception of the world (and indeed our prayers too) – and so often our hearts only truly engage when a journalist or a charity bring a situation to our attention by focusing on the story of a named individual. Perhaps only then do we recognise people as real fellow human beings – our neighbours in a world of diverse and precious individuals, living in networks of relationship in both times of struggle and pain, as well as in times of joy and celebration.

Yet God knows and sees each and every person and place. God knows everyone’s names and is passionate about the beauty and the brokenness of every person in this world. This is at the heart of the Christmas message:

Two thousand years ago God chose to come to earth in human flesh and chose a young seemingly insignificant woman, living in a then obscure village in Palestine, to give birth to the son of God in shocking circumstances in an insignificant animal shelter, accompanied by the man to whom she was betrothed. Of course, the names of these people and places are now well-known across the world: Mary and Joseph; Nazareth and Bethlehem.

And baby God in human flesh was given the name Jesus which means ‘God rescues’. Hundreds of years before his birth it had been proclaimed that this child would inhabit the identity of ‘God with us’, which in Hebrew is ‘Emmanuel’.

‘God with us’ as those known and loved by God beyond our imagining.

And it is significant that the first people who were told of the birth of Jesus Christ were not the named politicians such as Quirinius the governor of Syria; or the well-known religious leaders, or those whose names and faces were familiar. No, the first to be told of the birth were night-time workers – caretakers – albeit that it was sheep they were taking care of. In a different place and time it might have been night-time carers or office cleaners or refuse workers.

The shepherds were not people held in high esteem and it’s interesting that they are not named individually in the gospel narrative, but simply defined by their role: shepherds. Yet it was to themthat the angels appeared, revealing God’s treasuring of all, particularly those who often find themselves on the margins. Every one of those shepherds was unique, created in God’s image – a precious human being with a name, living out their lives in community and relationship.

And the invitation this Christmas in 2019 is for each of us to hear again that angel’s message of good news, and just as with those shepherds, to go and see – To encounter Christ for yourself.

Whether you’re someone who sees yourself as significant or someone who struggles with your sense of self-worth – whatever the story you’re living in your life at the moment – you are known by name and loved by God beyond your imagining – and God invites you into deep encounter.

That vulnerable child in a manger on a tiny spot on the earth’s globe grew to be a man who many despised and turned their backs on as his words and actions revealed the revolutionary love and mercy of God. He was cruelly put to death and hung on a cross out of sheer love for us; and as he took upon himself the brokenness of all the world he carried my name and your name. He offered – and goes on offering – forgiveness and new possibility. There is hope for the future, and one day all will be made new. Death and sin; failure, brokenness and darkness will not have the final word. God’s life, forgiveness, light and love are stronger, and here today we proclaim that truth in bread and wine.

And because of that perhaps we might each choose to participate in reshaping the sort of country and communities of which we want to be part. Communities in which we value relationship and dignity and justice; places where we speak and act with compassion and kindness, recognising that every human being is someone with a name and worth and potential.

Today may we, like those shepherds, be eager to run towards the Christ-child, once lying in a manger, and discover ever more deeply that we are loved by the Creator of heaven and earth who calls each of us by name.  AMEN