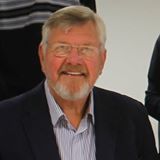 We caught up with retired banker Geoff Shaw who is a lifelong Christian and Chairman of the Board at Gloucestershire Credit Union.

“I first got involved with Stroud Valleys Credit Union (SVCU) when my local MP put my name forward to help with internal audit.

“The big challenge came for me when I listened to Archbishop Justin railing against payday lenders, back in 2013. At that time, he charged credit unions to compete with the likes of Wonga. I wrote Bishop Michael, asking in what way Gloucester Diocese was willing to help. As it happened, Gloucestershire Credit Union (GCU), whilst having savers and borrowers, lacked board members and management. The Diocese responded with a six point plan for both credit unions, including a cash injection. The money allowed GCU to employ someone help it recover. Although still small, it has grown hugely over the last five years. We have just under 1,000 members, with total savings of £335,000 and loans totalling just short of £200,000.

“We are responsible lenders and help people from all walks of life, especially those who might otherwise be financially excluded – people like a single mum whose washing machine has broken down. We don’t lend into the debt spiral – only to people that we consider will both willing and able to repay. We are a non-profit co-operative, owned by the members, whose savings we lend out, much like a building society. The ethical element of credit unions is very important to me and to our members.

“Until recently we were struggling to handle the volume of applications but we have received a grant from the Diocesan Life Development Fund, enabling us to employ an Executive Director and a Loans Officer. Gloucestershire County Council has also commissioned us to help develop services for young people leaving care to help them set up home.

“My work with the credit unions and other things that I do are a way putting something back into society. Whilst my role is largely strategic, I would hope that we have made a difference in the lives of at least some local people with our work and will increasingly continue to do so.”

As well as his role with GCU, Geoff has been treasurer of his PCC for 20 years and still sits on the PCC. Find out more about becoming a CU member at www.gloscreditunion.org.uk