Artist Rodney Munday is bringing new life to the sculptures at Cirencester parish church, with two new bronze statues replacing stone figures removed in 1963. The sculptures had become weather damaged and were dangerous. Since that time, their alcoves have been empty.

Sculptor Rodney aims to capture some of the essence of Cirencester’s history as a wool town, by showing John the Baptist holding a lamb above his head. The lamb represents Jesus, who sacrificed himself, putting an end to the Jewish requirement for animal sacrifice. 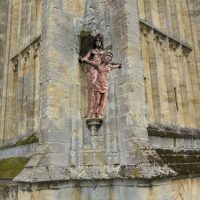 The statue of the Virgin Mary and the infant Jesus will show Mary holding Jesus’ hands out to the side – a gesture showing both support, but also suggesting his crucifixion.

10 artists entered a national competition to be the creators of this new artwork and it has now been given approval by the Diocese of Gloucester’s DAC, the planning authority for local churches.

A spokesman for the Gloucester Diocesan Advisory Committee said, “The statues are striking and convey a clear, universal Christian message. They break from the artistic convention of still and motionless figures of the Middle Ages. Using bronze means that they can expressing motion and dynamics; something difficult to replicate in stone, and perhaps announcing a departure from the traditional way of communicating the Christian message in a contemporary manner.”

If you’re keen to know more, the church is offering guided tours of the site to groups of up to five people, to explain the history of the tower and the role of the statues.

Rodney Munday will be working on the statues over the winter, ready for installation in August 2021. You can see his progress at https://projectblackjack.org.uk