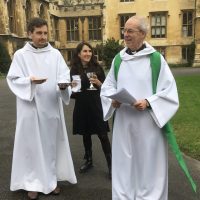 “I recently had the privilege of visiting Lambeth Palace which is, of course, the London home of the Archbishop of Canterbury who had recently been reported as saying: “It becomes ever clearer that climate change is the greatest challenge that we and future generations face. It’s our sacred duty to protect the natural world we’ve so generously been given, as well as our neighbours around the world who will be first and worst affected. Without swift decisive action, the consequences of climate change will be devastating.”

“The Most Revd Justin Welby had invited environmental officers from the 42 English dioceses to a mini-conference set around the launch of his new Lent book written by Ruth Valerio.  This event was happening just after our diocesan synod had agreed to an ambitious target for reducing carbon dioxide (C02) emissions and just before a similar motion was going to be debated by the CofE’s general synod.

“Everyone gathered in a magnificent oak-panelled hall surrounded by oil paintings of past archbishops. There was a buzz of excitement as people socialised and browsed various displays. Once the formal event got underway, Archbishop Justin interviewed several experts in turn:

“After about 45 minutes of scoping out the dire implications of even a 1.5% increase in C02 levels, each talked passionately about what they were doing.  The overall message was that if lots of people make even small steps this can add up to something really significant.  Finally, the Archbishop asked each person on the panel to answer this question: “What gives you the most hope for the future?”  He spoke of his own experience visiting the most deprived parts of the world where work has already started on caring for creation and long-term sustainability.

“Afterwards many of us went downstairs into the chapel to celebrate the Eucharist. By coincidence, Justin was marking the seventh anniversary of becoming the ABC.  The service was even more special for some of us who had never before used our smartphones to read the order of service!  We sang a hymn of praise (“O Lord, my God when I in awesome wonder”) accompanied by two youngsters in white robes playing guitars. Ruth Valerio gave a short talk (based on a reading from Job 38: 23-33) about the character of God who created the universe and yet has the capacity to care for every living creature.

“Unfortunately, the fire alarm went off quite loudly three times during the service but only for a few seconds.  My mind went back to recent wildfires Australia, Brazil, and California.  Archbishop Justin continued leading the service until a security guard walked straight up to the altar just as he was halfway through the prayer of consecration and demanded that everyone must immediately evacuate the chapel.  In a moment of inspiration Archbishop Justin ordered that the consecrated bread and wine should also be taken outside.  Five minutes later the service continued in the open air with everyone singing and smiling at the novelty of our situation. It struck me that Christian worship needs to be at the heart of our environmental activities.

“By the way the fire brigade soon put out a fire that had started in a kitchen and all the delegates went home with lots to think about!”