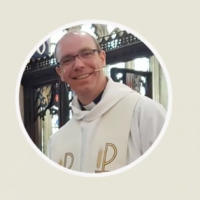 Bishop Rachel is pleased to announce that she has appointed the Revd Jason Taylor as her new Chaplain.

Bishop Rachel said. “I am delighted that Jason has accepted the invitation to become my new chaplain. He brings with him a wealth of gifts and experience and I look forward to him embodying and developing the role as he builds on all that has been shaped by my two previous, gifted and much-loved chaplains. I greatly look forward to welcoming Jason and his wife Janette in July.”

Jason is married to Janette, a primary school teacher, and has one adult daughter. He is currently Rector of the parish of East Leightonstone in Ely diocese; before this he was a Team Vicar and secondary school Chaplain in Hull. Jason was ordained deacon in 2003 and priest in 2004 in Derby diocese where he also served his curacy in Ripley.

When he isn’t working, Jason enjoys reading, going to the cinema and riding his motorcycle. He also has a thirteen month old Tibetan Terrier called Bella.

Jason said. “I’m very excited to be moving to Gloucester and taking up my new role with Bishop Rachel. This will be a new part of the country for Janette and I and we are looking forward to exploring the area and making new friends.”

Jason’s licensing will be in the Lady Chapel at the Cathedral at 5.30pm on Thursday 9 July.

Guy Treweek who stepped into the role after David Gardiner’s departure will be handing over the Chaplaincy duty to Tom Clammer this April, Bishop Rachel said. “I am immensely grateful to Guy for taking on the role during this vacancy period and now very grateful to Tom Clammer who will pick up the ‘baton’ from Easter until Jason arrives in July.