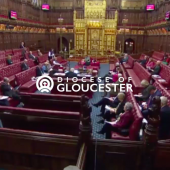 Bishop Rachel spoke in the House of Lords yesterday, during a session on topics around International Women’s Day and the United Kingdom’s role in advancing equalities for women everywhere.

She said, “Education empowers women and girls to be agents of change in their communities which benefit everyone. Across our world women and girls are also being agents of peace; and there are many examples […] So much of what we’re talking about today is rooted both in women and girls being valued – and being able to value themselves.”

My Lords, it is a privilege to participate in this debate although I am disappointed not to be at the UN Commission on the Status of Women this week which was to celebrate the Beijing platform for action, published 25 years ago, which saw countries agree to dedicate themselves unreservedly to addressing the constraints and obstacles to gender equality, thus enhancing the empowerment of women and girls all over the world.

Our own Government’s commitment to advancing equalities for women and girls worldwide is laudable, and I particularly welcome Baroness Sugg’s new role. The UK has a strong role to play, and girls’ education is crucial.

Last year, I had the privilege of visiting Egypt with the charity Embrace Middle East and visited some inspiring community projects enabling women and girls – Christian and Muslim – to be educated not only in literacy but also in issues of health including the prevention of FGM.

Education empowers women and girls to be agents of change in their communities which benefit everyone….

Across our world women and girls are also being agents of peace – and there are mnay examples. Last summer I visited a project in Israel where Jewish and Arab are working together to produce olive oil and other products – their business and relational concerns rise above division amidst political negotiations… which are being led by men.

Advancing equality is not only about women achieving positions in institutions that have been designed by and for men – it is also about wider society being shaped by women’s voices and experiences. It is also about men and women working together as equals. This benefits everyone and is about every person having equal value and the opportunity to achieve their full potential.

This commitment to justice and human becoming is core to Christian belief and faith. However, sadly this is not reflected in the continued prevalence of domestic abuse across our world, here in the UK, and indeed present among people of faith and no faith.

It is abhorrent – and I declare an interest as an ambassador of Restored, a charity that campaigns against violence against women. Violence against women affects every sphere of life and there are many groups across different faiths and around the world who are committed to gender justice and using their voices to be part of the solution. I was delighted last week to be alongside a passionate group of women, including Nicole Jacobs the Domestic Abuse commissioner, at the launch of the Faith and Violence against Women and Girls Coalition here in the UK.

So I look forward to the introduction of the Domestic Abuse Bill in your Lordships’ house, and constructive discussions about that legislation including proper intervention and support for children of domestic abuse, as well as migrant women. Anyone of any age and in any circumstances who is suffering domestic abuse deserves appropriate support and a path to safety.

So much of what we’re talking about today is rooted both in women and girls being valued – and being able to value themselves. So before I finish I want to touch on one final area which is that of women in the criminal justice system. A high percentage of these women have experienced some form of abuse themselves; self-esteem is low and we know that for many of these women, specific provision in the community, particularly in women centres, is far more effective regarding transforming lives and reducing crime.

As I have spoken about in your Lordships’ house before, I serve as Bishop to women’s prisons – and am President of the Nelson Trust – I welcomed the government’s production of a female offenders’ strategy in June 2018. This encouraged trauma-informed and gender-sensitive provision. Nonetheless the strategy is grossly under-funded – and the 5 million pounds of funding for community provision over two years, will run out in June. I hope the spending review takes account of the potential financial benefits of community alternatives to custody for women, notwithstanding their effectiveness for rehabilitation and wider society.