Fiona and Chris were married in St Mary’s, Wotton Under Edge this Saturday, becoming some of the first people in the country to marry since March.

Fiona works as a community nursery nurse, and Chris works as a chef in a school. The couple had originally decided on the date of 4 July, but had thought up until lockdown rules were relaxed last week, that they would not be able to have the service. Morag Langley, Associate Priest in the Tyndale Benefice, helped the couple to find a new church for a wedding that made headline news across the country.

Fiona said, “The wedding was originally meant to be in St Mary’s Church, but we had presumed that it was cancelled so we stopped all our planning… we stopped planning dresses, rings, shoes… but in the end it didn’t matter.

“On Tuesday evening Morag phoned me. She’s a good friend of mine and she said, ‘Do you still want to do this?’ She really took the pressure off for us – she found us a new venue at Alderley Church, she helped us to get a special license as our banns hadn’t been read.

“Friends brought us rings to try on and offered their garden for us to eat chips after the service. My mum managed to get us wedding rings that fitted, which was fantastic because we had been struggling to find rings that fitted.

“I had made a bet with Chris that the wedding wouldn’t happen but that if it did, Chris could wear his jeans! My dress didn’t turn up till this morning (Monday 6 July) and the delivery man recognised me from the television! It was fine though as we were both wearing what we were most comfortable in. The whole service was really nice and made us realise that there’s more to a wedding than just the dress.

I think I first met Morag at Little Church baby group when I was nannying or at Messy Church with my own children. She was just so approachable and lovely and made things so easy for us. My son was christened in St Mary’s and it’s my local church. We’ve been there a lot.”

Fiona’s parents are shielding, so were unable to be at the service, but Sky News set up cameras in the church and filmed the whole service, sending it to Fiona’s parents so that they could still be part of the couple’s special day.  The hope is that in a year’s time, Morag will be able to hold a service of blessing for the couple, which everyone can attend, and also christen their daughter Mallory at the same time.

Fiona said, “It wasn’t what we had planned, but it truly felt like it was meant to be.”

Morag said, “They are a lovely couple and a delightful family. I’ve known Fiona for some years, so it was such a joy to be asked to marry her and Chris. I remember the day last summer when she rang me and said, ‘Chris and I are engaged – will you marry us?’ It was also a wonderful privilege to do so on their chosen date at very short notice. Despite her parents not present, despite the weather, despite the shorter service and far fewer guests, it was a very joyful service and there was a tangible sense of the presence of God. I felt that there was more engagement from the couple and their guests with the words of the liturgy which spoke more clearly because some of the usual parts – such as hymns, and poems spoken by family or friends – could not happen.”

Their official honeymoon has been cancelled but they are hoping to have two nights at CBeebies Land to celebrate. They have made various media appearances, but you can catch them on Monday evening on Points West or BBC Breakfast television on Tuesday 7 July, to tell their story.

You can read the Sky News article here —> 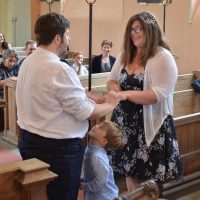 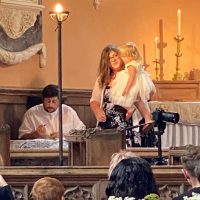 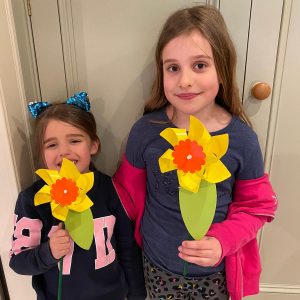