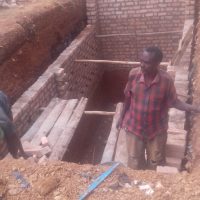 The congregation at St Philp’s and St James Church, Hucclecote has sponsored a new toilet block for Murubona school, in Western Tanganyika.

Murubona School which is in our partner Diocese of Western Tanganyka, educates 1,300 pupils, with half of them attending in the morning and half attending in the afternoon. All these children were sharing just one toilet block of ten cubicles and no running water.

A spokesperson for the church said, “When we visited them in 2019… the conditions were so bad that those children who used the toilets and couldn’t afford shoes had to be injected against worms every few months.

“The headteacher told us that the one thing that would make a real difference to the school would be new toilets, which is why we came back determined to help.

“As a church, we have sent £5,000 this year, so that two separate toilet blocks, for girls and boys, with a joint cesspit and running water were able to be constructed. The facilities were officially opened this month by Bishop Sadock.

“The school was closed for a while, due to coronavirus, but has been open since June. In spite of everything, the school has a good academic record, of which the Head and staff are rightly very proud.