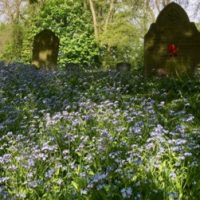 Back in 2015, Elkstone PCC started a project to create a wildflower meadow and a composting loo in its grounds.

Brian Howlett, PCC Treasurer, said, “As I write this in May, the meadow looks very mature with masses of cowslips, primrose, camassias and narcissus.  There is evidence that we have many more species to enjoy later in the summer. So, provided we avoid many summer downpours, the meadow should be resplendent for the first time.  Four to five years is about normal to establish a wild flower meadow.”

Brian talks us through the process of establishing the wildflower meadow.

“With funding commitments in place we undertook much research on how to set up the meadow.  Lectures, visits to established wild life meadows and literature from Plant Life were invaluable. In early 2016, we mapped out the area in the churchyard that was to become the meadow.  During the late spring and summer, we proceeded to prepare the ground by removing as many pernicious weeds like dandelions, as we could, scarifying and regularly scalping the grass to the soil so it would accept the seeds that we were to sow later.

“In August we were donated a bale of hay from Clattinger the second meadow of sixty initiated in 2013 by HRH Prince Charles to mark the sixtieth anniversary of the Queen’s coronation. Together with the children of the village we strewed the hay across the area and created bug hotels.

“Wild flowers from seed take time to establish so during the winter of 2017 we boosted the area with plug plants of many native species seeds that were in the hay.  Especially it was important to ensure that we had ample seed of yellow rattle Rhinanthus minor as this plant parasitises the roots of grass thus reducing competition for the flowering plants for food, air and water.  Its presence is essential in establishing a wild flower meadow.

“By the time the meadow and composting WC were blessed and inaugurated by the Bishop of Tewkesbury on 8 June, we were pleased by how many species had already taken hold, especially the marsh orchids, Dactylorhiza fuchsii flowering prettily.

“To maintain the meadow, during 2018 to 2019, we cut to the ground in late autumn and during the winter, we do further plantings of bulbs such as Camassia, meadow saffron Colchicum autumnale, pheasant eye narcissus Narcissus poeticus, and wild native tulip Tulipa sylvestris.  If necessary we do another cut in late winter/early spring just before the flowers start emerging from their dormancy. You can find more pictures of the meadow in this period at the website https://www.achurchnearyou.com/church/14302/page/49509/view/

In September PCC applied for a  diocesan wildlife garden grant with the aim of  enhancing the wildflower meadow by increasing the yellow rattle plants.  They invited the children from the Coberley Primary School to sow more seeds and jump and trample them into the soil. Much fun was had by all.

If you’re interested in getting your own £250 #grantsforgardens, visit www.gloucester.anglican.org/2018/grant-aid-for-wildlife-gardens