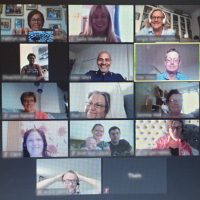 A weekly ‘taster’ video placed on the village Facebook page has helped attract a growing number of people who have never been to church before to online services broadcast by St Michael and All Angels in Bishop’s Cleeve, Gloucestershire.

What began as a simple invitation to tune into the first online service amid growing concern about the impact of the pandemic has now become a regular slot for the church.

Team Rector Malc Allen, said around three times as many people who came to church on Sundays now view the online services – from just over 200 to more than 600 who tune into service either live or on playback.

Many are regulars, he says, but there is also a growing audience of local people who are seeking out spirituality and prayer.  The church made its Facebook group public after lockdown and now has more than 500 members. It has a number of online gatherings, including Skype prayer groups and is also running an Alpha course online exploring the Christian faith. Just under a half of those taking part in the Alpha course, he believes, had no previous contact with the church and had joined after watching services online.

“We have around 20 people on the course which is really exciting for us, quite a few have come through the online services and the Facebook group. We think we have around nine people taking part in this who were completely new to the church – there are other people who were at different stages of exploring the Christian faith,” he said.