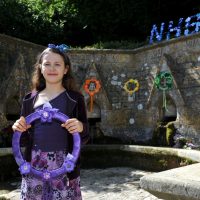 Two world wars did not stop the children of Bisley from dressing their village wells with flowers on Ascension Day to give thanks for their pure water, but the Coronavirus lockdown meant a few changes were needed to ensure the tradition could be upheld safely in its 157th year. This meant that the annual spectacle of pupils from Bisley Blue Coat Primary School processing through the streets accompanied by a silver band playing ‘Onward Christian Soldiers’ was replaced by the poignant sight of lone youngsters carrying differently coloured hoops decorated with ribbons and homemade felt flowers.

These visits to the wells were timed at hourly intervals to ensure social distancing rules were adhered to, with the children hanging their hoops in an arc to represent a rainbow. The first child to visit the wells was Dylan Morris (11), whose mother Lizzie is an accident and emergency nurse working in hospitals in Gloucestershire.  Towards the end of the afternoon, Bisley’s vicar the Rev Sue Murray visited the wells to offer a blessing and a prayer to keep the village safe and protect NHS staff and all key workers.

“Bisley’s annual dressing of the wells event has been a tradition in the village since 1863 and we haven’t missed a year since then,” explained the school’s business manager Dawn Lane. “The lockdown meant we couldn’t organise a large procession, but we arranged for seven of our year six pupils who live within walking distance of the wells to use their daily exercise allocation to uphold the tradition with the hoops. All were accompanied by their families.

“The 10 remaining pupils in year six made additional blue and white felt flowers at home which, with the help of children of key workers still attending school, were used to create floral tributes spelling NHS. These were placed at the top of the wells by school staff. We felt this was a fitting way to mark Ascension Day while observing respecting the social distancing and lockdown measures put in place to protect the NHS and save lives.

“Traditionally the dressing of the wells was the village’s way of giving thanks for its clean water and the health benefits this brought. This year we’re also giving thanks for our health in the face of Coronavirus, and for the dedication of those working in the NHS.”

The lockdown is especially poignant for pupils in year six, whose last few months as Bisley Blue Coat pupils won’t feature the usual rites of passage that mark their transition from primary to secondary school.

Dawn said,“Usually the wells dressing is the start of their journey to the next stage of their education. It typically marks the end of SATS exams and the start of the transition period for year six pupils. This was our tribute to tradition, our current year six leavers and the NHS and key workers who are doing a remarkable, selfless job in the most difficult of circumstances. When we take part in Ascension Day ceremonies in the years to come, we will tell our future pupils about the Class of 2020, who under exceptional circumstances, created a truly memorable well dressing event.

“We thank our year six pupils for their contributions and take the opportunity to wish them every success in the future.”

Lizzie Morris accompanied her son Dylan to place the first hoop on the wells. Lizzie was brought up in Bisley and took part in the Ascension Day celebrations herself as a pupil of Bisley Blue Coat School during the 1980s. Subsequently she helped make floral decorations for her daughter, Imogen, to carry when she attended primary school.

“Today’s dressing of the wells was different but still lovely,” she said. “I think we had the best possible celebration that we could have in the current circumstances. I think we’ve pulled out all the stops that we could. The people of Bisley managed to dress the wells and give thanks for their clean water, and by implication, good health, even during both the First and Second World Wars  and it’s great that  Dylan was part of today’s very special celebration.”

The Revd Sue Murray blessed the decorations wearing a rainbow-coloured stole especially made by villager Christine Bulcock using the same ribbons as those adorning the hoops.

“It was a blessing to be involved in the annual well dressing at Bisley for Ascension, which went ahead in a suitably socially distanced way,” she said. “God bless all have been involved in any way on this special occasion, may God bless this village.”

The dressing of the wells in Bisley was started in 1863 by the Revd Thomas Keble, the village’s vicar for almost 50 years. Since then Bisley Blue Coat Primary School has continued the tradition on Ascension Day with the help of parents and grandparents, who help the children to create the striking floral arrangements placed on the ornate stone water heads.

Remarkably, the dressing of the wells has continued uninterrupted since 1863, including throughout the two world wars.

Bisley Blue Coat’s new head teacher Jonathan Preston was looking forward to his first dressing of the wells and praised the pupils for managing to continue the tradition despite the restrictions.

“Bisley Blue Coat is a church school and as such we take the story of Noah as our representative bible story. It is a story of devastation and a story of hope. The rainbow represents God’s promise to look after the world. For our children it marks the hope that they will take forward into their futures. It is this symbol that has taken hold during this current pandemic, with children all over the world creating and displaying rainbows for all to see.”