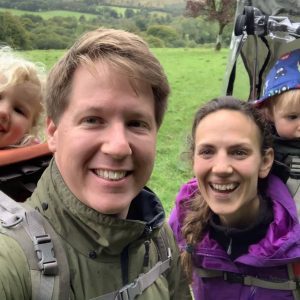 Oliver Smith was a typical 21-year-old student, reading History and Politics at The University of Warwick and fully immersing himself in all that student life had to offer. But under the surface things were not as they seemed.

“I’d describe my lifestyle as debaucherous! I’d get really drunk about three times a week, one night stands and loads of partying. I probably didn’t work nearly as hard as I should have! I was living the ‘normal student life’ and it should have made me happy.

“I can see, looking back, how utterly barren my life was. People speak of a God-shaped hole and that was clearly present in my life. I suffered quite badly from anxiety and depression and felt lost. On paper, I had everything – family, friends, a good education… but my life felt totally empty.”

Then, as Oli was doing his final exams, he reached crisis point.

“I thought I’d failed my first exam. My inner monologue was telling me that I had spent three years studying and for what? I was going to be a complete failure and my parents would be so disappointed in me. I was a 21-year-old boy and I felt completely isolated. I was really anxious… a lot of crying at night time. It felt like I was on my own, with no one to talk to, no hope, no way out… I didn’t have anyone I felt I could speak to about my feelings. Thoughts of suicide seemed like a way of controlling a situation that was out of my control.

“One day, my big brother, Charlie, turned up on my doorstep in his battered Subaru Impreza with an engine as loud as a boat. I think I’d spoken to him a bit about how depressed and low I was feeling, and I’d noticed the huge change in his life when he became a Christian 6 months before.

“When Charlie became a Christian, the lights came on in his life, and he could see by contrast that the lights were definitely off in mine. He was in love with Jesus and had found it to be the most precious, life-changing thing… he wanted the same for me.

“Both of us went to Sunday school as kids, so when he started talking about Jesus, it was calling on the truth that I’d already known, deep down. He told me I was in a real mess and the way out was to ask for forgiveness and to give my life to Jesus.

“So we were sitting in this battered Subaru Impreza in the car park of a country pub in Warwickshire, on a dreary day. He led me in a prayer to say sorry for rejecting Jesus and all the wrong I’d done and asked Him to come into my life. I was expecting a lightning bolt moment but there was no angelic choir, no voice from the heavens, but just this overwhelming sense of peace. I knew at that moment God was so much bigger than the University of Warwick, than my exams… he was in charge and calling the shots and that gave me such deep peace. I’d turned to Jesus and my life had changed forever.

“My anxiety hasn’t gone altogether – it still returns, but not to the same extent as before. I’ve had counselling and I’ve got a community at church who all have their faith, the biggest thing in their life, in common. People genuinely love you.”

Oli reconnected with Anna who he’s known since Sunday school and had become a Christian 2 weeks before he did.

Oli and Anna have served together in their churches for the past eight years and Oli is now exploring a strong call to ordained ministry. If you want to meet Oliver and find out more about the message that changed his life, come along to St Matthew’s and the Minster, Cheltenham .

When life is difficult, Samaritans are here – day or night, 365 days a year. You can call them for free on 116 123, email them at , or visit samaritans.org to find your nearest branch.