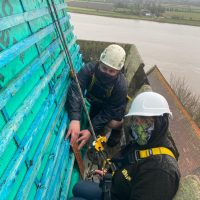 Jane Curtis, Churchwarden at St Peter’s Church, Newnham-on -Severn blogs about the challenges and rewards of repairing a church spire.

What prompted you to begin a big project during lockdown?

“Less than a year after completing the biggest project for over a century – that of refurbishing our eight bells at a cost of £160,000 – we noticed that our spire was leaking water on to the new installation.

“We called in the steeplejacks to check the lightning conductor and I asked them to look at the roof of our spire. Having been up to look more closely I had discovered the roof was made of wooden shingles and clearly one or two looked damaged or were missing. The steeplejacks returned soon afterwards to replace as many damaged shingles as they could to prevent further water damage over the winter of 2019/20, but although things were improved by this step, we still had to have towels to protect the bells and frame, which needed constant checking and changing after storms. Then the first lockdown began…

“Early in April, I contacted the DAC (the Diocesan Advisory Committee who help us look after our church buildings) as a first step to approaching the repair work and discovered that we would need an architect to produce plans, specification and tender for prospective contractors. In July we were able to award the contract and I took on the project manager role.

How did you pay for the work?

“Once we knew that the re-shingling of our spire would cost about £50,000, the next task was to apply for Grant Aid. We had completed many applications only a couple of years previously and the prospect was daunting. However, a first look at Trusts on the internet revealed the Enovert Community Trust. We met their criteria and had one week to meet the deadline for their next review!  The maximum grant available would be £50,000. We were honest in our application and said that during the current national situation we were not prepared to ask our community for financial help. We met the deadline, and on 18 September we received the wonderful news that we had been awarded the full amount.

How long did the work take?

“We had by this time planned a possible start date of 9 November. The Funding Agreement with the Enovert Community Trust was completed and the work began on its’ planned date… Winter is not the favoured season for a big job of this nature for steeplejacks, but the company we used were outstanding in their commitment to our project. They briefed me on what they were doing at every stage of the work.

“Woodworm was discovered in some of the timber beneath the shingles, so the PCC approved treatment both outside and inside the spire, and this was done as work progressed. Our contingency fund helped to pay for the unexpected woodworm treatment and for the later need to secure the nut holding the iron cross tightly in place within the spire.

“Work on our spire was finished on 6 February 2021, and the PCC have agreed to contract the steeplejacks company to carry out high level maintenance work on the church annually. This will ensure that roofs, gutterwork and leadwork are all looked after for the foreseeable future.”

How did you engage your community with the project?

“Villagers and school pupils were invited to ‘sign a shingle’, where they could make their mark on the tower. These shingles are faced down to protect the signatures for years to come. This turned out to be a great way to engage the community with the project.

“The PCC kept our steeplejacks comfortable and cheery with cakes every week, and this was rewarded by the erection of our Christmas star atop the restored iron cross, to the delight of the village community.”

How do you feel now the project is complete?

I had not undertaken anything like this before, and it has been a rewarding experience where I have dealt with other professional bodies and learnt a great deal. I am extremely grateful to all those people who helped me to execute the project, and those who encouraged along the way.

Joe Knight, Curate in Newnham said, “We’re absolutely delighted with all the passion and hard work that Jane has put into this project. Through her diligence, the PCC has been guided to make big decisions that not only safeguard the future of the spire, but also will continue to engage the community. A project that could seem daunting and burdensome was turned into a joyful story of friendships made, and good news shared. Thank you to Jane, our steeplejacks and everyone who made this possible during difficult times.”