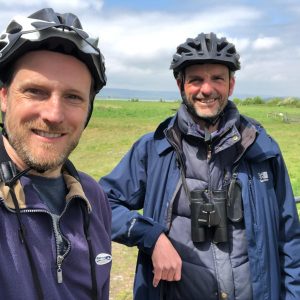 Keen birdwatcher and environmentalist Andy Langley has been using his interests to raise money for his church, St Lawrence, Barnwood.  Andy’s employer, Ecclesiastical Insurance, runs a scheme for staff whereby any funds raised for a charity will be matched by the company, up to £5,000.

Andy regularly holds sponsored events to ensure that he is making the most of this generous package to support the charities that he cares about most. He regularly raises large sums of money for the World Land Trust with sponsored bird watches.

Andy said, “As a Christian it seems like a natural response to look after the amazing planet that we live on. I’m very conscious of the damage that is being done to the environment, with both the climate and biodiversity being in crisis. Although we are reliant on governments to make good decisions to prevent these crisis’, environmental charities do an amazing job making sure some of the most precious habitats are protected.  A healthy environment is vital for everyone around the world and the poorest will be most affected if environmental processes start to break down.”

He is married to Sarah and has three children, Ethan, 9 and Harriet and Isabelle, 7, who are very proud of his amazing track record in raising money.

Sarah said, “Andy is an incredibly thoughtful and resourceful man. We love his passion for nature and for our planet. We’re so proud of his achievements and his knowledge of the natural world, and we’re looking forward to seeing what he will do next.”

The total amount raised on this expedition, including match funds from Ecclesiatical was £4,231, which is being split:

Andy cycled 24 miles and walked several kilometres, reaching Frampton on Severn by bike. He recorded 70 different species of bird, with the Revd Rob Crofton joining in the expedition to verify his findings and helping point out some species that Andy would have missed.

Andy and Rob went through Barnwood, into central Gloucester, along the towpath to Frampton, finishing at Splatt Bridge, just outside Frampton, before returning home, spotting birds along the way.

Andy said, “It was a good trip for woodpeckers with a great spotted woodpecker in the arboretum opposite the church and a green woodpecker feeding on the canal towpath. Other highlights included a very tame goldcrest which came within a few metres of us, and 3 ravens flying overhead in Frampton, making their distinctive cronking calls.

“It took much longer to reach Frampton than I was expecting, mainly as the towpath was slippery after the rain from the previous night, so we couldn’t cycle very fast.  This left less time at Frampton, but we were able to spend about an hour here birdwatching on foot by the two lakes.  We saw several goose species which aren’t native to the UK, but have made themselves at home at Frampton.  I’m not sure where they originated from, but I don’t think they are Slimbridge escapees!”

At Court Lake, Frampton on Severn, they sighted 6 hobbies flying over the lake, catching insects. Andy said, “Hobbies are a migrant falcon that spend the winter in Africa, coming here to breed for the summer, and are one of my favourite birds to watch.  I was also glad to see a Ross’s Goose (of unknown origin) that I have never seen in the “wild” before.”

They stopped for lunch at Splatt Bridge, just outside Frampton where they spotted a peregrine, a shelduck and a marsh harrier. On the way home there were able to spot 2 red kites, buzzards and hobbies that were making use of sunny weather to soar on the thermals.

Andy said, “I had a great day, which was made all the better knowing that it was raising money for good causes, especially as the church’s finances have suffered so much over the last year.

“I think Eco Church is an amazing scheme, giving a framework for what churches and congregations can do, to have a positive impact on the environment.  At St Lawrence’s Church, we have started our journey, having achieved a bronze award last year, but there is still plenty more we can do and we want to get lots more people involved.  It was great to be able to raise money for Eco Church, as it would be amazing if more and more churches join the scheme and help the church lead by example.

“It was also good to know that the birdwatch had been carbon neutral (although I’m not sure my back agreed), I’ll definitely try this again.  Thanks again for all your donations.”