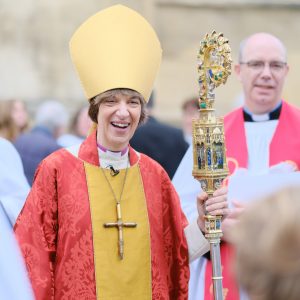 In the days when the judges ruled, there was a famine in the land, and a certain man of Bethlehem in Judah went to live in the country of Moab, he and his wife and two sons. 2 The name of the man was Elimelech and the name of his wife Naomi…

6 Then she started to return with her daughters-in-law from the country of Moab, for she had heard in the country of Moab that the Lord had considered his people and given them food. 7 So she set out from the place where she had been living, she and her two daughters-in-law, and they went on their way to go back to the land of Judah. 8 But Naomi said to her two daughters-in-law, “Go back each of you to your mother’s house. May the Lord deal kindly with you, as you have dealt with the dead and with me. 9 The Lord grant that you may find security, each of you in the house of your husband.” Then she kissed them, and they wept aloud. 10 They said to her, “No, we will return with you to your people.” 11 But Naomi said, “Turn back, my daughters, why will you go with me?

And now reading from verse 14

‘ Then they wept aloud again. Orpah kissed her mother-in-law, but Ruth clung to her.

“Do not press me to leave you or to turn back from following you! Where you go, I will go;  where you lodge, I will lodge; your people shall be my people,  and your God my God. 17 Where you die, I will die—    there will I be buried.
May the Lord do thus and so to me, and more as well, if even death parts me from you!” 18 When Naomi saw that she was determined to go with her, she said no more to her.19 So the two of them went on until they came to Bethlehem. ..

35 In the morning, while it was still very dark, he got up and went out to a deserted place, and there he prayed. 36 And Simon and his companions hunted for him. 37 When they found him, they said to him, “Everyone is searching for you.” 38 He answered, “Let us go on to the neighbouring towns, so that I may proclaim the message there also; for that is what I came out to do.” 39 And he went throughout Galilee, proclaiming the message in their synagogues and casting out demons.

Endings and new beginnings resonate with our Christian faith and who God is  – the alpha and the omega – the beginning and the end. And even now we look for that ending and new beginning when God’s kingdom will come on earth as in heaven. I know I repeat this often, but I make no apology because the coming of God’s kingdom is what gets me out of bed in the morning. At our synod last November I spoke about God doing a new thing – again and again and again – but never ignoring the past – or the pain – and always calling us to live each present moment.

I wonder what your key experiences have been over this past 15 months. There has certainly been loss of some sort for everyone, even if  it’s only been the loss of the familiar and close contact. For others it’s been even deeper. And now we have a strong sense of return  as we move towards July 19 –  But it is not ‘going back’ and it is not ‘release’ or ‘returning to normal’.

In Ruth’s beautiful commitments to Naomi I see  compassion and kindness and love  – a ‘with’ and a ‘ being in it together’. What does that mean for us as we return to a different shape of doing and being church?

In this Eucharist, as in every Eucharist, we turn and return  – as we confess our sins and turn back to God once more; As we tell of what God has done for us in the past in Jesus Christ; and as we are nourished by Christ in bread and wine in the present; And in the present commit ourselves to shaping the future in the power of the Holy Spirit as we live and work to God’s praise and glory.

Ruth and Naomi didn’t know what the future held but they set out. I suspect they saw themselves and their story as pretty insignificant – just two women in a pretty broken place, yet decisive in the next step and living it together. Yet actually it’s a deeply significant story and Ruth gets a mention in the family portrait gallery of Matthew chapter 1, because Ruth went on to marry Boaz, and Boaz became the Great Grandfather of David from whom Joseph, was descended – Joseph the husband of Mary the mother of Jesus Christ born in that little insignificant place of Bethlehem to where Ruth and Naomi returned.

Whatever story you are living, please know that it’s not insignificant  – Your individual story and the story of your local worshipping community and context, and the story of our diocese and who we are together.

In this Eucharist as we come to the end of the triennium of this Diocesan Synod, it is an ending and a new beginning, and all held within God’s overarching story and our story of  life together  – and indeed our  LIFE vision.

In these past couple of weeks I have been really saddened and frustrated by some badly placed comments and reference to clergy and stipends as ‘limiting factors’ to mission. You may or may not have picked up this story following someone called John McGinley’s comments at a recent church-planting conference, and it’s not a story I want to dwell on, but I do want to say that I’m sad because there has been an implication that clergy – and particularly parish ministry and that inherited pattern of church  – is somehow now to be overshadowed and superseded by new ways of doing things  – new lay-led worshipping communities. And I’m sad because I certainly don’t want people to hear that healthy parish ministry is to be done away with or downgraded to second place. Parish ministry is a gift I never want to lose. And so let me put on record now my thanks to our parish clergy  – stipendiary and self-supporting – let me say thank you loud and clearly  – And Thank you to clergy serving as chaplains and in other places too. I not only celebrate you, I am privileged to share in ministry with you.

But I’m also sad and frustrated because I do want to fan into flame new ways of doing things, but it’s not either /or –  it is both/and – and one is not better than the other. It’s that varied landscape of church – what is often called mixed ecology.

I’m sad and frustrated because I actually had a conversation with John McGinley a few weeks ago, and my conversation with him seemed to be very different from what was then said at the conference. My conversation with him resonated with so many of the things we’re grappling with here as we commit to planting and nurturing new worshipping communities. What does it mean to be lay-led and be Anglican? What does it mean to be Eucharistic communities and to grow in our understanding of lay ministry which is different from ordained ministry, and all of it about the whole royal priesthood of the baptised people of God witnessing to God’s love and the kingdom of God?

We are exploring all these things as we go forward with our Church Army Centres of mission, and with sports ministry and growing new worshipping communities through sport and physical activity particularly with young people and families. We continue to explore all these questions as we put schools at the heart of our mission, and as we explore what church planting might look like on new areas of housing.. etc etc. And let’s also note that many of those new ways of doing things are growing from within parish worshipping communities led by parish clergy and lay leaders together.

So let me also put on record my thanks to our lay leaders. I celebrate you and am privileged to share in ministry with you.

And I do want to urge all of you to read again my address to the Synod last November – simply because I don’t want to go on repeating all the things that I said within it.

So let me finish with a couple of comments on our gospel reading. Here is Jesus Christ on earth – always fully attentive to people and situations in every present moment, but never distracted by the wrong thing in each present moment. No doubt, every day there were people who wanted to be healed and longed to see miracles, and we have accounts of Jesus being fully present in many of those situations. But there were undoubtedly many people who were bitterly disappointed when Jesus’ response in the present moment was ‘not now – let us go on’. Jesus Christ’s focus on earth was always on the kingdom of God, and knowing what each present moment was about. And his activity was always rooted in prayer.

May that be true of us to as we continue to pay attention in the present, daring to return to something that as yet is unknown; and being willing to play our part in shaping the future, rooted in prayer with our eyes fixed on God who is love and in whom our beginnings and endings are held.