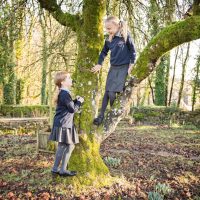 St Andrew’s CofE (VA) Primary School in Chedworth is set to become one of the first net-zero carbon schools in the country.

It has been awarded a £120,000 as part of the Government’s Public Sector Decarbonisation Scheme. The money is being used to convert all lighting to LED units, install motion sensors, insulation for ceilings, floors and walls, and double-glazing for the windows.

The school also plans to add solar panels on the roof and replace an old oil-fired boiler with an air source heat pump (ASHP).

Headteacher, Mrs Nikita Smith, said she had been inspired by the steps taken by the school.

“Here at St Andrew’s Church of England school we show children that all can contribute towards change – and that change can happen on their doorstep,” she said.

“A lot of our curriculum content covers the climate crisis and the damage to our environment in the world, but our school’s effort makes these topics accessible to every pupil.

“We recycle everything from glue sticks to clothes and this larger scale project will help children understand how renewable energy works.

“Already, the preliminary work has created a lot of excitement among key worker children and led to lots of questions.”

Energy consultant, Matt Fulford, who is working with the school, said: “Despite lockdown, works are ongoing, so the changes will be visible to pupils when they all return. This will hopefully inspire the children to become powerful messengers about acting now for the benefit of their future.”

“There is a clear demand and need for funds like the Government’s grants to reduce carbon emissions.”

It’s one year since the Church of England voted to commit to net-zero carbon emissions by 2030. In January 2020 the Energy Footprint Tool (EFT) was launched and lots of churches in the Diocese of Gloucester have been using it to help record their carbon footprint.

The first results are now back and national data from the report reveals:

The tool provides advice to parishes who have entered their data about how to take further steps and an appliance-style energy rating showing how the church compares to others of a similar size.

The report suggests there is still significant scope for churches to install cleaner technologies to reduce their carbon impacts with just one per cent of churches presently having installed solar panels. The study also found that if all churches switched to a renewable electricity tariff, the estimated total net carbon footprint for church buildings would be 22 per cent smaller.

The Energy Footprint Tool is currently closed, but will reopen by March for churches to enter the information from their 2020 bills.