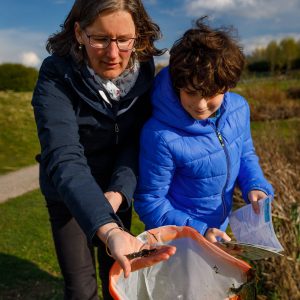 St Lawrence Barnwood, in Gloucester, has been awarded a grant to explore the relationship between science and faith through the church engagement programme Scientists in Congregations, which is run by Equipping Christian Leadership in an Age of Science (ECLAS).

St Lawrence is one of 22 churches and organisations in England and Wales to receive grants to be used over the next 18 months on a creative, public-facing project.

Project leaders Petra Crofton and the Revd Rob Crofton, Vicar of St Lawrence, said: “We are delighted to have received this award which will enable us to deliver a programme of teaching and engagement on Science, Faith and Caring for God’s Creation that we hope will impact our church and local community and provide resources for wider use in churches and schools. We want to address a real desire among children and adults for greater understanding about questions of science and faith and help people find hope in the face of challenges such as the climate crisis and extinction of species.”

The project will build on the ‘Explore Creation’ and ‘Awesome Science’ workshops for families and children that Petra has been running at St Lawrence Church and in Barnwood C of E Primary School. The grant will enable development of resources for use with children in both church and school, and a programme of activities for the church and local community including a monthly themed service, a special day in the Cotswolds, and a blog about science, faith and creation-care themes.

The resources will draw on Petra’s work in the two children’s books Science Geek Sam and his Secret Logbook – Lion Hudson (2017) and Science Geek Christy and her Eco-Logbook – Lion Hudson (Forthcoming, September 2021): “Awesome Science” (astronomy, geology, fossils, dinosaurs, evolution and people) and “Explore Creation” (ecology, environmental science, care for creation and tackling climate change) will both help children and teachers explore these topics from a Christian perspective. A free cross-curricular pack for primary schools with 16 lesson themes, from plastic soup and food waste to bird migration and the rainforest will be published online later this year. A pack with six lessons on science and faith will follow suit. Each pack follows one of the adventurous Science Geek novels.

All the resources produced will be trialled locally through book clubs, workshops and lessons and will then be made freely available online. In the second phase of the project, the resources will be rolled out nationally and internationally and translated into French. The programme will be launched in September to coincide with Big Green Week and the publication of Science Geek Christy.

The Revd Prof David Wilkinson, Project Director of ECLAS and Principal of St John’s College, said: “We are delighted to be working with churches on such promising projects, and look forward to seeing how congregations and the communities they serve engage with science and faith in fresh and exciting ways. We are proud to offer additional funding for follow-on projects for the first time this year, which will help churches reach even more people with the message that science is a gift from God.”