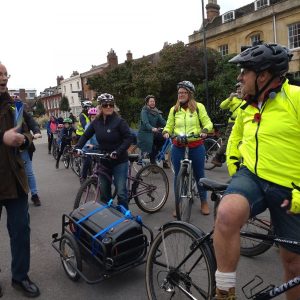 A gathering of over 160 people, including these 40 cyclists came together to show how much they care about climate change and care for the environment. They included families, kids in pushchairs, teenagers, and grandparents, representing the breadth of our local community.

It was part of the Global Day of Action for Climate Justice, a series of events locally, nationally and internationally, drawing attention to the issues being discussed at COP26.

One of the organisers, Cate Williams, Environmental Engagement Officer for the Diocese of Gloucester said, “By gathering we are showing support for the need for serious and far-reaching commitments for the sake of our planet.  Our gathering was one of many, nationally and internationally, that included others of similar size to ours in Gloucester alongside the tens of thousands gathered in Glasgow itself, and large gatherings in other major cities such as London, Bristol and Cardiff.

“We heard from a range of people about why tackling the climate crisis is so important and were able to creatively express our hopes for the planet, supported by local organisation ‘Art Shape’.”

Ribston Hall pupil Haroop Bhandal was one of the speakers who shared how important care for the planet is for her, and others in her community in Hempsted. She is a volunteer for St Swithun’s Church’s eco-church project.

A group walked through the city to raise awareness of the climate crisis before arriving at the Cathedral, stopping en route to engage those in the city. They took part in several symbolic ‘die-ins’, representing those already suffering the fatal consequences of climate change.

Many of the walkers carried banners – some homemade and some from the organisations they represented, including Extinction Rebellion, Tearfund, Insulate Britain and Greenpeace.

Cate continued, “Keep an eye out for more activity locally on carbon reduction as we continue to do what we can to save the planet, as a city and as a region.  We need small household changes, relatively small community activity and larger scale city, county and national initiatives, all working together so that we can make a difference.” 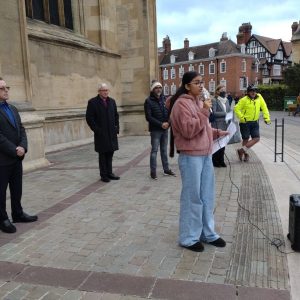 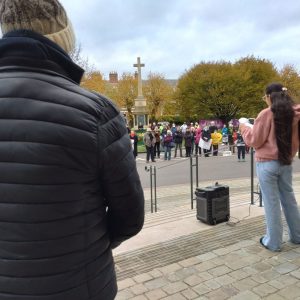 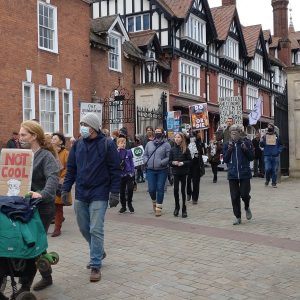