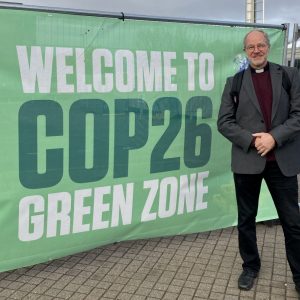 COP26, billed as the ‘last best chance’ to prevent the worst effects of climate change, is now over. The Revd Daniel Button, Director of Gateway Theology School in Gloucester, was at COP26 with a group called the Christian Climate Observers Programme (CCOP) and looks back on his time at the conference.

“COP26 involved 40,000 registered participants, including UN Secretariat units, national delegations, specialised agencies, and Non-Governmental Organisations (including faith-based groups like ours).  It’s not just national leaders hammering out policy with a few big-name speakers like David Attenborough and Greta Thunberg. The CCOP group included people from all over the world who had been sent as delegates to speak on behalf of their organisations and countries about the impact of climate change.

“There were a lot of experiences I wasn’t expecting – overwhelming at times. The day before the conference began, one of our group arranged a meeting with Al Gore, former Vice President of the USA and Nobel Peace Prize winner for ‘informing the world of the dangers of climate change’.  Gore clearly knew his stuff!  That’s why it was all the more prescient when he framed the entire climate change crisis as ‘a moral, ethical and spiritual issue.’

“I found it remarkable to hear a politician refer to climate as a spiritual issue.  He said at one point, ‘This is truly a moral choice.  We are destroying God’s intricate, balanced, life-giving creation, and it’s immoral, it’s unacceptable.’  Alluding to the enormous challenges we face, he was nevertheless adamant, ‘I believe we are going to win this struggle’, but he cautioned us, ‘guard your hearts against despair.  It’s easy to feel angry at those who aren’t doing what they should, and frustration at the slow pace of progress.  Hang on to hope – without hope there is no action.’  The CCOP group I was with during the week in Glasgow could not have been more inspirational in putting our Christian hope into action. 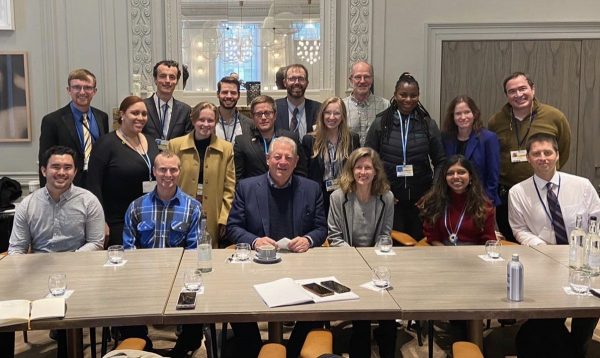 “So many people in the Church have struggled to understand care for the environment as a truly Christian issue. We’re brought up with a gospel of salvation for human beings.  But the Gospel is good news for all of creation, not just individual humans.  God gave humanity the mission to rule over the whole of creation as God’s image bearers, in love. Instead we have ruled over it with greed, selfishness, and exploitation, causing terrible damage – and we are now seeing the consequences.

Protecting our planet is much bigger than individual salvation, but it’s a Gospel issue. That’s what the Church needs to see.”

“Are you optimistic about COP26’ I was asked more than once?  My response was… ‘no – I’m not optimistic – but I do have hope’.  It seems paradoxical, but there was a great deal of discussion about the nature of hope – in particular our Christian hope.  Reports coming from the political deliberations were as expected – some encouraging decisions, future promises, new targets set, but nothing remotely matching the scale and urgency of the crisis, the immediate implementation of policies that could hold global warming within 1.50C – we’re still on a trajectory toward a catastrophic 2.4-2.70.  So where is the hope?  Christian hope is rooted in the faithfulness of a loving God who will not abandon his creation.  Hope is a discipline, not an emotion; a duty, not a luxury.  Hope is putting our faith into action, persevering no matter the cost.  As Paul wrote, ‘we know that suffering produces perseverance; perseverance character; and character, hope’.  I’ve never understood that sequence as clearly as now.

“The most inspirational aspect of my COP26 experience were the incredible, passionate, young, multinational, Christian climate activists in the CCOP group itself.  They represented nations and movements around the world, coming from Philippines, Argentina, Zimbabwe, India, Hong Kong, Burundi, France, N. Macedonia, the USA, Canada etc (and a number from Britain as well).  Marinel Ubaldo, in her mid-20s, from the Philippines, became a climate activist after she lost many of her family members in recent hurricanes.  Shamiso Mupara from Zimbabwe was part of an organization developing new types of farming in drought-stricken areas. Over 30 Christians formed the group, reporting back to their countries, praying together and witnessing this historic occasion in human history. In our devotional time we spoke of the biblical meaning of ‘bearing witness’ – that a witness is not merely one who ‘sees and observes’, but one who bears witness, just as Jesus’ disciples were commissioned to do to the ends of the earth.

“Like the disciples, most of the CCOP group were young – several were still university students, others were working in forestry, environmental science, engineering, climate advocacy.  These were not COP26 tourists soaking in the atmosphere and dazzled by the expositions; they were not taken in by the ‘greenwashing’ rhetoric or manipulations of leaders showing off the ‘youth involvement’ for photo-ops.  They were setting meetings with their national delegations, world leaders and MPs – with John Kerry, Obama, Justin Welby… they were lobbying for an agenda of justice and action, writing articles, doing interviews, sending reports… one was the main organiser of the Climate Vigil service which was simulcast to several cities around the world from our Tearfund base there at St George’s Church, with 100,000 people participating.  The CCOP group were a profound example of being 21st century witnesses to a gospel of hope directed toward the whole of creation.

“Many will have come away from COP26 with disappointment, feeling it was as Greta predicted, just ‘Blah, blah, blah’.  I came away feeling absolutely inspired and motivated by what God’s people are doing.  As Christians we must never give in to despair nor the false hope that God will simply step in and fix everything. This is our mess, and its ours to clean up.  Things will most certainly get worse, but we have a sure and certain hope in a faithful God who will accomplish his plans for this world as he always has – through his people, not instead of his people.

Listen to an interview with Dan on BBC Radio Gloucestershire from 1 hour 18 minutes into the show.