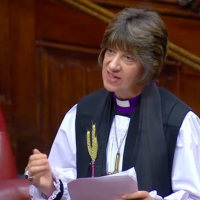 Bishop Rachel’s article as featured in The Times, Redbox, on Monday 15 March 2021

“One of the strange things about this viral pandemic is that we are reacting and responding to something we cannot see, yet it is pervasive and destructive. Furthermore, our desire to restrict its spread through periods of lockdown has inadvertently led to the rise in other unseen and destructive things. Behind closed doors it is not only isolation which has increased, so too has the scourge of domestic abuse, which has been referred to as a shadow pandemic.

“This week the Domestic Abuse Bill reaches Report Stage in the House of Lords and for the first time will provide a statutory definition of domestic abuse which includes emotional, controlling, coercive and economic abuse as well as physical violence. It has been repeatedly pointed out that the bill is a once-in-a-lifetime opportunity to put something in place which provides a robust framework to provide protection for victims and survivors of domestic abuse, as well as formally establishing the office and role of the Domestic Abuse Commissioner, the role currently undertaken by Nicole Jacobs the Commissioner Designate.

“Those who have shaped this legislation are to be applauded for their stand against the abhorrent existence of domestic abuse. Yet precisely because it is a once-in-a-lifetime opportunity, it is vital that this bill ensures that no one is rendered invisible. This bill must be inclusive, such that the legislation protects every human being from the youngest to the oldest, irrespective of gender or background. Thus, most of the amendments being proposed in the Lords are about opening a door and shining a light to ensure that those people who are at risk of being hidden are seen and heard.

“I am personally proposing an amendment to advocate for migrant victims of domestic abuse. For some years the Domestic Violence (DV) Rule and the Destitution Domestic Violence Concession (DDVC) have enabled those who arrive in the UK on spousal visas to apply for indefinite leave to remain in the UK and to have access to public funds while they do so. Together, the DV Rule and DDVC have provided a significant and humanitarian lifeline for a group of vulnerable people, yet this does not extend to those on non-spousal visas.

“With No Recourse to Public Funds (NRPF) or housing support, very few of these victims are permitted access to refuge spaces and are usually faced with the decision of remaining with a perpetrator or becoming destitute, and often separated from children. Furthermore, they often cannot return to their country from origin as they would be in danger of violent retribution. Overall we are probably talking of no more than a few thousand people, yet behind every statistic there are unique people with names and stories, and the latter are often heart breaking.

“The government’s pilot scheme, Support for Migrant Victims, does not offer adequate protection for all who need it, and there is no guarantee of a permanent legislative solution.

“Alongside migrant victims of domestic abuse and other people who are being made visible in various proposed amendments, there is another group of people who are kept hidden behind locked doors, and this time the doors are those of prisons.

“Nearly 60 percent of women in prison have experienced domestic abuse and for some their offending was driven by abuse. The amendments tabled by Baroness Kennedy QC focus on making this visible, and I have added my name to an amendment which seeks to clarify the degree of force which is reasonable under the common law of self-defence where the defendant is a survivor of domestic abuse and has allegedly used force against their abuser.

“What is needed is not cells but access to holistic trauma-informed community support, such as that provided by Women’s Centres. We also need to ensure that there is a focus on prevention and appropriate intervention work with perpetrators.

“In 2015 Matthew Rycroft, then the UK Representative to the United Nations, said that, ‘How a society treats its most vulnerable … is always the measure of its humanity’. That needs to be kept in mind as we examine this bill.

“The recent government road map to navigate a way out of lockdown is about ensuring a safer future for everyone with regards to the threat of an invisible virus. The Domestic Abuse Bill must also be a roadmap for safety in which all are included.

“The bill comes to Report Stage during Lent, which for Christians is a time of walking the road of the cross towards Good Friday and Christ’s crucifixion, yet continuing on the path to Easter day. For Christians, the three days of Easter weekend are about entering into pain and suffering, yet journeying to a place of resurrection, holding fast to hope and life. The Domestic Abuse Bill must do likewise.”

Bishop Rachel has successfully moved amendment 70 to the Domestic Abuse Bill. She divided the House, moving 318 to 269.