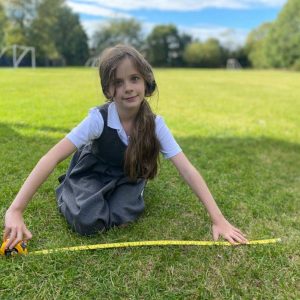 A seven-year-old from Barnwood is on a mission to save the rainforest and she’s prepared to do whatever it takes to make a difference.

Harriet Langley is a pupil at Barnwood Church of England Primary School, a member of St Lawrence’s Church Barnwood and a member of 4th Hucclecote Brownies.

She is taking part in Operation Ocelot, a long term initiative coordinated by the World Land Trust. Children and young people are encouraged to measure out a piece of land, such as a school playing field, a clubhouse or a garden and raise money to preserve an equivalent area of threatened rainforest, which this year is in Guatemala. The area of land being bought and protected is an area of rainforest surrounding lagoons, wetlands and carbon-absorbing mangroves, which is home to animals such as the Ocelot, the American Manatee, and the Jaguar.

Inspired by her twin sister Isabelle, who had her hair cut for the Little Princess Trust 2 years ago, Harriet has decided that she will also chop off her long hair and donate it to be made into a wig for children who have lost their own hair through cancer or other conditions.

At the same time, she has pledged to try to raise at least £310 in sponsorship money to save her own patch of rainforest. Any funds raised between 6 and 19 October up to £310 will be doubled by a private donor and then doubled again by the World Land Trust, as part of their Big Match Fortnight, resulting in all donations up to £310 being quadrupled. You can sponsor her here www.justgiving.com/fundraising/barnwoodprimary

Harriet wrote to her school to ask for permission to measure out the school field.

In her letter, she said, “I think this is important because [the rainforests] are a home to God’s creatures that are endangered, and saving the trees helps stop climate change.”

Mrs Matson, headteacher at Barnwood Primary said, “Our school vision is to Love our neighbour and to be the best we can be for the good of all. I was delighted when Harriet wrote asking if we would support her in these efforts to not only raise money to protect an area of land and endangered species but in her efforts to raise awareness of the effects of climate change on our world. Harriet and her family are a true example of our school vision in action and we could not be more proud of her.”

Children from St Lawrence’s Church’s youth group, The HUB, for children in years 6 to 9 are also joining Harriet in her fundraising for Operation Ocelot. They have measured out the church field and aim to raise a further £300, which when quadrupled in the same way would save an area of rainforest the size of the field. Sponsor The HUB here www.justgiving.com/fundraising/thehub-stlawrence

The youth group, and the church as a whole, are focusing on the connection between science, their faith and care for the planet this year, as the church starts a year of eco-activities.

To add to the fundraising, Harriet’s dad, Andy, is completing an annual all-day sponsored birdwatch during Big Match Fortnight to see as many species as possible.  This annual event has raised £46,500 over the last three years, when including matched funding from Ecclesiastical Insurance which is doubled again through World Land Trust’s Big Match Fortnight.

Please see the links above for each of these fundraising activities if you would like to make use of the quadruple matching on donations made between 6 and 19 October.