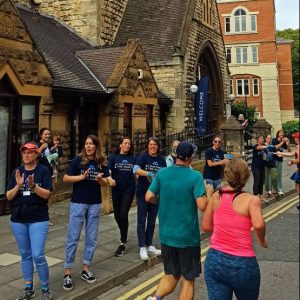 St Matthew’s and the Minster, Cheltenham, was out in force to cheer on runners in the Cheltenham Half Marathon on Sunday 5 September.

As part of their mission to be visible examples of God’s presence in the town, they lined the street outside the church and handed out jelly babies and drinks to the runners who passed the church building. With high fives and clapping they encouraged everyone running past.

The Revd Richard Coombs, the Rector, said “The run coincided with the launch of the church’s new branding which uses the theme of “rivers of living water” from John (7:37-38).

“The volunteers were dressed in smart, new branded t-shirts showing droplets of ‘living water’ (by which we mean the Holy Spirit). The living water is received from God, flows out from them and passes on to others.

“Passing out bottles of water to thirsty people really resonated with that new focus. My dream outcome from the new branding is that other people can become passionate about Jesus too!” 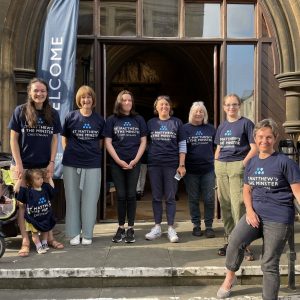 The church building is placed conveniently at approximately 7 miles into the 13-mile run, making it ideally situated to encourage those who were starting to flag. The church members also served coffee and chocolate brownies for the spectators.

Richard continued, “The first runners largely ignored us as they were understandably intent on finishing quickly, but the later runners were smiling and thrilled to be cheered on. We ran out of jelly babies and had to go to the shop to buy more! Being there for people really put the church on the map on the day.”

Once the morning service started, the songs were broadcast out onto the street, to add to the atmosphere of celebration and encourage the runners, while allowing the volunteer greeters to remain involved in the worship.

The day ended with a Church Day Out for 180 congregation members, including a hog roast, bouncy castle and a chance to gather together and kick off the autumn successfully.