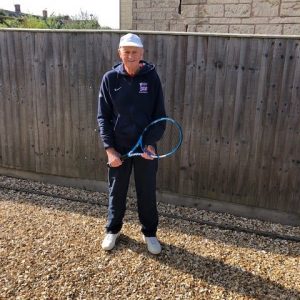 40 years after he came to faith in Jesus, Ken Spensley tells us about how his calling to a life of ministry has played out, and his hunger to do more and be more of the person God created him to be.

Although Ken is now well into his 70s, he has been described by his physio as being the fittest 70-year-old in Gloucestershire and until recent kidney surgery, he had been out running nearly every day. He’s a trained Lawn Tennis Association coach.

He said, “I came to faith during my second Alpha course. When I was in my teenage years, I had a flirtation with Christ, but I had no roots to my faith and no one supporting me. But the Spirit was with me, and never left me.

“It was on a second Alpha course, 40 years ago to the year that I really became a Christian. I was speaking to a wonderful Christian man, who also happened to be my dentist!

“We were having a coffee break during Alpha. I’d done Alpha before and I knew what it was about. But I said to him, “I don’t understand about Christ dying for me – that’s the bit I can’t get my head around.”

He told me, and it still makes me emotional now, thinking about it, “We are separated from God, who is at the top of a high mountain, and we are down in the valley with our sins. Christ laid down his life, so that we could climb over him and get to his Father.

“Everything suddenly made sense and fell into place. I actually felt a thump in my tummy as it landed, and my chest expanded. I heard the thump inside me, of my heart, as I finally understood. And that was the start of a love affair with God.

“My wife could see my excitement and joy and wanted to learn more. Within a year she also became a Christian. That was in October or November of 1999.

“I’m a hothouse flower. I grew up in a church with brilliant footfall, but for the past nine years, I’ve lived in the country with smaller churches. I’ve had to learn how to care for my faith in slightly colder and damper conditions!”

“I recently did the Loved + Liked course on Zoom and the best thing about it was being with other Christians. There were so many beautiful people there and to be in the company of other Christians takes me deeper in my faith. It’s so nice to express yourself fearlessly. My greatest joy is to sit down with another Christian, read the scriptures together and see what they have to say about it.”

Ken has set up a prayer book in the back of his church and prays for all the needs listed there, after Sunday services each week. “It’s a privilege to pray for people. I have spent time in hospital as a chaplain and been at people’s bedsides just before they passed away… God is using ME! Grace is such an outrageous scandal, don’t you think!”

Ken collects food for local charity Caring Hands, he goes into his local school to do Open the Book where he brings his own style and energy to the Bible stories.

He said, “I take in locust sandwiches to speak about John the Baptist. I go in and tell them that they’ve started selling frozen locusts in Tesco. I offer the teacher a sandwich and she bites into it with a really loud crunch! (It’s actually a crisp sandwich but they don’t need to know that!)

“I offer children the chance to come out to the front and pray with me and I have 15 children, all coming and standing with me, praying out loud. Kids who said to me, ‘I don’t believe in God’, because their parents have said that he doesn’t exist. And these children are praying and joining in.”

Ken is adamant that he won’t be slowing down any time in the near future. “I don’t think I do enough. I have lots of time and I like to use that to bless others whether that’s with church cleaning or coaching tennis.”

Ken’s home church is St Peter’s, Willersey and is currently dropping in on churches across Vale and Cotswold Edge, north and south Devon.