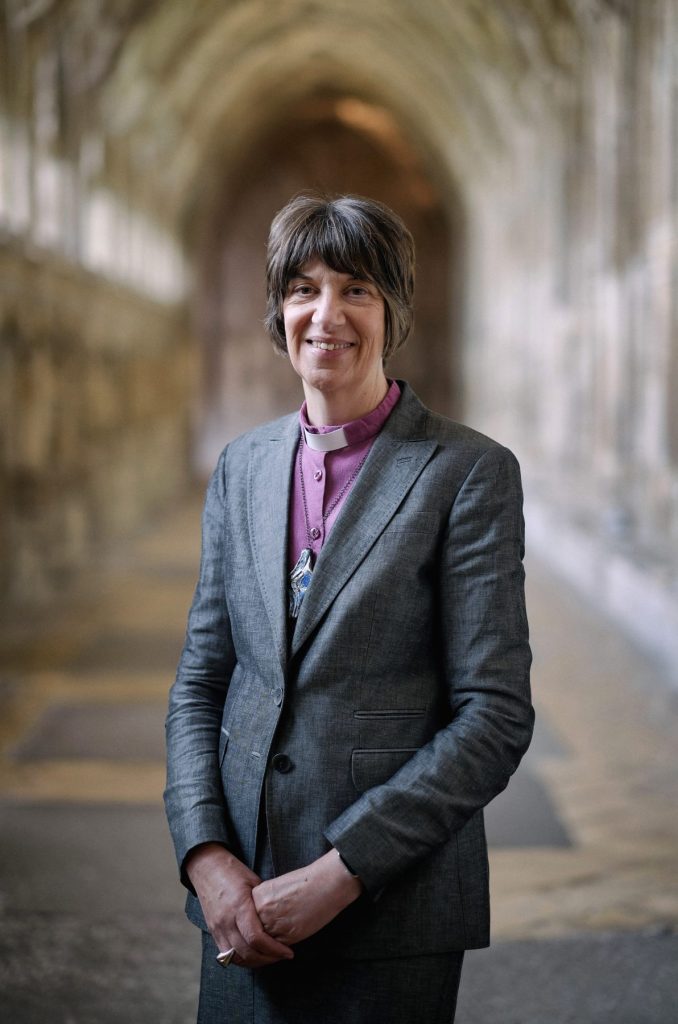 Over the past year there has been so much loss of different sorts, and amid the bereavement and the trauma I have been very struck by how many people have said that one of the things they have missed is being able to share food and drink with friends. It’s certainly one of the things I’m looking forward to.

Our gospel reading takes place at a meal with friends, as Jesus and his disciples share in the Passover meal, and in the verses just before our reading we are presented with the institution of the Lord’s supper.

It is not only the socialising at table with friends that we have missed, but also the gathering together around the Eucharistic table.

It’s painful that we cannot be together around the table in the cathedral for this chrism service.

In our gospel reading we hear the table-talk of the disciples turn into a dispute about success and greatness. There’s a raw honesty about it. It’s out there and named …

Who’s done the most impressive zooming, or delivered the most meals? And who is in line for the best prize when it comes to remote school learning?

Yet, implicit in any dispute around who is the greatest is usually an underlying deep fear of failure, and it’s no coincidence that this dispute arises just after Jesus has stated that one of them is going to betray him and they are wondering which one.

And although Jesus talks about his disciples standing by him in his trials – those are words full of grace because Jesus knows that not only will oen of them betray him but in the coming hours most of the remaining friends will flee, and at least one of them will deny him completely. Yet Jesus still promises them a kingdom.

And rather than getting drawn into the dispute about success and failure, Jesus talks about what good looks like: kingdom-of-God good.

In our Old Testament reading, Samuel is challenged to understand what God’s good looks like, and it is eventually the unseen youngest and the servant shepherd, who is anointed as the future king. I wonder if any of the disciples at that Passover meal would have recalled that Old Testament episode, as Jesus talks about the youngest and the one who serves – so very different from the accepted norm in society.

And as Jesus paints a picture of what Kingdom-of-God good looks like, he once again tells them to be like him. To take on a ministry of among and of serving. Not a doormat-meek-and-mild-ministry, but rather a courageous, confident and humble serving. This is about being called to be Kingdom-table people.

Some of our disputes over this past year have been around Holy Communion during the viral pandemic. Discussion around the what, how and why, has hopefully encouraged deeper theological reflection and understanding, but I also hope we have been more attentive to what it means to be kingdom-table people in every aspect of our lives, as we continue to explore what good looks like, not only in the present but in the continually emerging future.

As we hear Jesus speak about eating and drinking at his table in his kingdom, it’s easy to hear that as simply being about the distant future – the time when the kingdom of God will be fully and finally established. Indeed, those strange words of Christ about the disciples sitting on thrones and the 12 tribes of Israel, resonate with some of the apocalyptic imagery in the final chapters of Revelation. But before Christ’s words ‘you will sit’ come the words that ‘the Father has conferred on me a kingdom’ – and the Greek is clear: ‘you may already sit and eat and drink at my table in my kingdom’ – even now.

The judging which Jesus names is about governing and leading – and as well as being apocalyptic imagery it could also be argued that this began very soon after Christ’s ascension and the Day of Pentecost as the disciples led the Church into being.

And imagine if the sitting and eating and drinking at Christ’s kingdom table is not exclusive to those first disciples. Elsewhere in the gospels we have Christ’s imagery of banqueting and feasting with the King, and all are invited.

When I have been asked what I’ve been learning over this past year, one of the things I have repeatedly commented on is exclusion and inclusion.

For example, we have discovered how zoom can be inclusive for some but more excluding for others. And then there’s been the exclusion which has come about through isolation, or because of certain decisions (perhaps around education or access to support and activities); People excluded from being with the dying or being present at the birth of children; And we are only just beginning to see the impact of all of this exclusion.

Some of the big awakenings in our country over this past year have been around exclusion and diminishing and the sort of world we want to be: Black Lives Matter; Violence against women and girls is to be challenged; the destruction of our planet and the misuse of creation requires us to live differently…

As we live the coming days and emerge into the next season what are we learning as followers of Christ, about exclusion?

Of course, there has also been inspiring inclusion over this past year – Greater community connection in many different ways. Just one example has been the distribution of meals in partnership with ‘The Long Table’ in Stroud (I know a number of you have been involved with the most recent initiative this week). That name ‘The Long Table’ speaks of an inclusive table, infinitely long – a kingdom-of-God-shaped table.

As Christ’s people who has and has not been served at our tables, whether recently or over many years? And let’s be careful we don’t simply ask that as a narrow question regarding our Eucharistic worship, but rather about who we are as the Church and how we have been living the ‘with’ and the ‘among’.

Are our metaphorical chairs low enough for children and soft enough for those who struggle? And where are our tables? What would it look like, and taste like, if we prayed ever more deeply for the Holy Spirit to be at work within us and around us, so that we more fully embrace Christ-like serving as God’s kingdom-table people, ‘with’ and ‘among’?
And what would it look like, and indeed sound like, if we were all more courageous in our distinctive table-talk about the love and hope of Jesus Christ, and life in all its fullness, even in our places of struggle?

Speaking of table-talk let me go back to where I began: Jesus’ disciples jostling about success and failure … and missing the point.

What could become our distracting disputes around success or failure? Who or what is the greatest – Parish church, church plant, chaplaincy, OneLife…? Evensong or Messy church? Church buildings or school playground? under-fives or the over 80s? Clergy or laity? Rural or urban? Stipendiary clergy or self-supporting clergy? The daily lived-out faith of the hospital cleaner or the daily lived-out faith of the hospital consultant? Which is the greatest? The potential list is endless and if we ever began such disputes we would be missing the point.

What can good look like if we grow in our encouragement and challenge of one another in varied ministries and every day-of-the-week discipleship in different contexts, praying for God’s kingdom to come on earth as in heaven.
And as we ask God to give us our daily bread, what does it look like for us to be nourished by God so that we might nourish the world – kingdom-table people and kingdom-table communities – making the table longer and wider and evermore present, so that people of every age and every background can choose to come to God’s table to be served and to serve.

Incidentally, I hope these questions will stay front and centre as people engage with deanery plans in the coming months: What would Kingdom-of-God-good look like?

Of course, as we open ourselves to discover more of what it means to be kingdom table people, it is important for us to live with authenticity.

So, one final thing:

As we walk to the cross and beyond to the empty tomb, I am so deeply aware of people’s weariness and the fact that people are carrying so much. And if your head is full of those noisy thoughts of all those places where you think you’ve failed, and words such as ‘I could have done better’, I pray you hear once again Christ speaking your name in love and inviting you to come and sit and eat and drink at the kingdom table, knowing that Christ comes among us with grace, love, forgiveness and mercy, as the one who serves. He has given us a place in his kingdom – your place-name card is already there – not only for the future but even now.

Thank you for the privilege of sharing in our life together in this diocese. May you walk gently but courageously through these next three days – knowing God’s love and blessing, as you are a blessing to others – kingdom-table people, with and among.