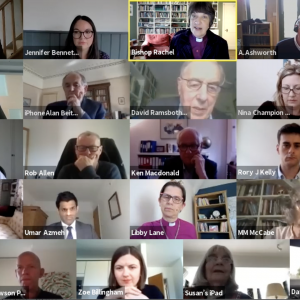 Bishop Rachel, as a Lord Spiritual and in her role as Anglican Bishop for Prisons in England and Wales, hosted an online forum to discuss the Police, Crime, Sentencing and Courts Bill soon to be debated in the House of Lords.

Speakers, Peers with interests in the criminal justice system, experts, and practitioners in the field, explored how prison sentences have increased exponentially since 2005, but over the same period those serving longer sentences now have to wait a very long time before support is provided for their rehabilitation. In addition, speakers highlighted the role of the Parole Board and the differing perceptions of the public on crime and punishment.

Bishop Rachel said. “We look for a criminal justice system which is restorative, responsible and relational, and is effective in focusing holistically on prevention and rehabilitation as well as appropriate punishment. As the Bill reaches the House of Lords, we are looking for legislation which is not only ethical, but is also based on the highest quality of evidence and research as to effectiveness.”

His Honour Peter Rook QC
His Honour Peter Rook QC, is judicial Vice Chairman of the parole board. Called to the Bar in 1973 Peter was appointed a Queens Counsel in 1991. From 2005 he was a Senior Circuit Judge at the Old Bailey retiring in 2017. He has also sat as a judge in the Court of Appeal and sat as a coroner between 2017 and 2019.

Umar Azmeh
Umar Azmeh is a dual-qualified barrister and solicitor, presently undertaking a DPhil in Law at the University of Oxford (St Anne’s College). He started his career as a criminal barrister, and subsequently qualified as a solicitor at a trans-Atlantic City of London firm of solicitors. His doctoral thesis seeks to critique the terrorism sentencing scheme in England and Wales. He has also spent time working as a lawyer at the Court of Appeal (Criminal Division), during which he worked on some of the most significant terrorism cases in the jurisdiction.

Chris Fry
Chris Fry has been an independent member of the Parole Board for 4 years. Prior to that she had a long career in the probation service which included 10 years working with domestic violence perpetrators. She is also a currently a panel member for the judicial appointments commission. Chris is also a lay member of the general synod of the Church of England.

Bishop Rachel’s speech, given today in response to the Queen’s Speech. This was part of the Adjourned Debate on the Humble Address to Her Majesty – Home Affairs, Justice and Culture:

Take it further: read about Fighting for Women’s Justice