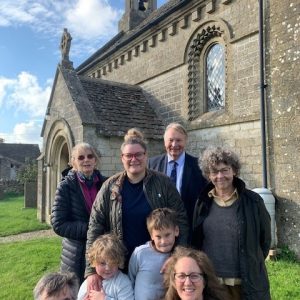 Churches are being encouraged to ring their church bells at 6 pm for half an hour on 30 October, the day before the COP26 conference begins.

Churches in Stroud are going one step further and will be asking people to ‘Clang for the Climate’ using bells, buckets, pots and pans.

US climate envoy John Kerry has called COP26, the United Nations conference on climate change in Glasgow, “the last best chance” to avert the worst consequences for the world.

Taking inspiration from Clap for Carers, the organisers of Clang for Climate are asking people to come out onto the streets for 10 minutes at 6 pm on Saturday 30 October with pots, pans, buckets, bells and anything else that can be banged or rung to make a loud noise, sounding the alarm for the climate emergency.

Some churches will be joining in with their bells, including St Laurence’s in Stroud. Hugh Richards of St Laurence’s PCC said, “Our plan is to toll the big tenor bell 135 times, representing the amount by which we as humans have already increased the concentration of carbon dioxide in our atmosphere, from 280 to 415 parts per million.”

Susan Whitfield, churchwarden at Alderley with Tresham, near Wotton-under-Edge said that they are planning to ring the bells at Tresham Church, a little Chapel of Ease in their parish.

Susan said, “It is a warning on climate change and a mark of solidarity with everyone who wants to do something about it. Church bells were traditionally rung as warning signals, as well as for the other reasons we still ring, like weddings, church services etc.

“We only have a single bell in our little church’s bellcote, but we are planning to ring out and to share locally so that everyone knows what the bells mean.

Earlier in the day on 30 October, the bells of St Laurence’s will be ringing out half-muffled, with a leather muffle strapped onto one side of the clapper of each bell. The usual metallic sound of the bell will alternate with a soft, muffled sound, giving an echo effect.

Steeple Keeper Dr David Pouncey said, “This half-muffled bellringing is associated with mourning, and on this occasion, it will be in mourning for all the damage done to the planet that has already taken place.”

The Revd Simon Howell, Team Vicar in the Stroud Team Ministry said, “Clang for Climate is about reminding ourselves and our leaders about the fact that we really are in a climate emergency, with the alarm bells from the scientists and from extreme weather events around the world ringing ever louder.  As Greta Thunberg puts it, we need to act as if our house is on fire.”

The IPCC report has stated unequivocally that the extreme weather events which have swept the globe are the consequence of man-made climate change. The UN Secretary General has signalled ‘Code Red for Humanity’, which he would not do lightly.

Our planet has given us warning after warning, through floods, wildfires, droughts, heat domes and hurricanes, that we have profoundly affected the balance of the planet and are making it increasingly hostile to mankind.

There can no longer be any doubt that humanity is now in mortal danger… and on a global scale.

One thought on “Ringing out a warning on the climate emergency”