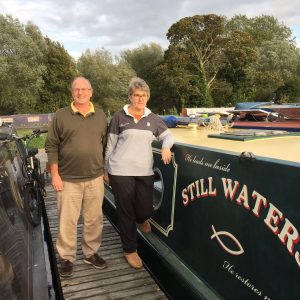 Everyday faith on the canal for Reader Charles Garven and his wife Pat.

Pat and Charles live on a 65-foot long narrowboat, which they had purpose-built to be a home for them when they sold their house, 16 years ago.

“It’s a comfortable, well-designed boat, but at the same time, it’s a little like living in a Smarties tube. You have to manage clutter carefully. If you buy a new pair of shoes, you have to chuck an old pair out!”

Charles and Pat were living in a 1930s, 3-bed semi in a comfortable part of Bath. They were both working full time and thought they were doing okay, slowly climbing the property ladder.

One day they were on holiday in a bed and breakfast in Derby and they met another couple who lived on a boat.  “We asked them all the usual questions – ‘Is it cold? Do you have hot water? How do you use the toilet?’”

“It seemed like a simple encounter at the time, but I got one of those ideas in my head that wouldn’t go away. Pat indulged me and we went to look at boat shows. Eventually, I asked her if she thought we could make the change to living on a canal boat. I nearly fell over backwards when she said ‘maybe!’”

“We agonised over whether it was right to sell the house and buy the boat. We couldn’t afford both, so with the help of friends who listened to us and prayed with us, we made the decision. Whether God led us to it, I don’t know, but I certainly don’t feel he disapproved!”

They had a comfortable boat made for them and decided to call it Still Waters, to reflect the version is Psalm 23.2 which says “He leads me beside still waters. He restores my soul.” 16 years later they are still confident that they made the right decision.

“Does the canal boat tie in with being a Christian, or does being a Christian tie in with living on the canal boat?” “For us, the two things just go hand in hand. When it comes to my life, God seemed to have a shortage of neon lights. Like a lot of other people, I don’t have the confidence at the time to say that ‘God is leading me here’ but I can look back to see that God was there in the decisions we made.  It’s about trusting God that the day to day things he leads you to do, are the things that he wants you to do.”

Charles and Pat have lived at Saul Junction for the past 6 years and have got to know their neighbours well. They are members of Framilode Church where Charles is a Reader.

“There are now, in the 2020s, more boats on the canal network than there has ever been during the heydays when the canals were the motorways of the industrial revolution. I wouldn’t say we had a ‘ministry’ on the canals as such, but if you’re a Christian, you want to make friends with people – we enjoy making friends! The difference in the friendships you make on the boats is that some people you live next to for years and years, and some people you just meet for 10 minutes at a lock, but during that time at the lock together you feel like best pals as you have shared interests.”

“Sometimes you meet someone and it has a big impact on your life. Once, when we were out on the canal, a boat pulled up alongside us and a couple said that they had been looking out for us for so long! I couldn’t remember having met them before, but the couple told us that the things we had talked about had prompted them to get a boat! If only all evangelism was that simple!”

While Charles has been a firm Christian since he was 16 years old, he believes in being gentle with sharing his faith.

He said, “If you try to ram something down someone’s throat, they will choke on it. I’m definitely no Billy Graham, but if a question is asked, I like to think I would try to answer it. I am inspired by someone I met once who said, ‘When I get to heaven, I don’t want to find someone I know isn’t there because I neglected to tell them the Christian message.’ I don’t neglect an opportunity, but at the same time, I try not to overdo it.”

“Faith and life for me go hand in hand. One is as practical and useful as the other.”

Charles is hoping to bring the boating community together for a traditional Christmas carol service on 11 December. It will be the third carol service they have held, bringing together all sorts of different people who make their homes on the canal. The Frampton Silver Band will play and all are welcome, whether arriving by car or by boat. The Stroudwater Team of Churches will be providing mulled wine, mince pies and friendly conversation. If you know someone who lives on the canals, please do share this 2021 Canals Carol Service Poster with them.