The journey to ordination was not simple for Helen McGeoch, as she was content following Jesus and sharing her faith without taking the path to ordained ministry.

She was employed as the children’s outreach worker at St Catharine’s, Gloucester, doing preaching, children’s ministry, prayer spaces, leadership roles and sharing her faith with those she met.

“I’d seen previous friends go through the process of ordination, and I thought what’s the point? I don’t need to be a priest to love people.”

However, her priest, the Revd John Itumu had other ideas! “John just wouldn’t leave me alone! Every time we met together as a leadership team he would bring up his feeling that I was called to ordained ministry.

“In the end, just to shut him up, I said that I would commit it to God in prayer for two weeks. He promised that if God didn’t make her sure of a calling within those two weeks, John would never bring it up again. I know when I commit something to God in that way and I can journal my way through it, I know I hear God in a different way.”

But things didn’t turn out as Helen planned.

“I took it to God in my thoughts. The first day I just said, ‘Here I am’ and the second day I said, ‘What if you wanted me to be a priest, to do some training … talk to me, I’ll do it if you want me to…’

“It was the biggest turnaround – it didn’t take two weeks, just two days. I thought ‘what if I said yes?’ and it was like a physical feeling of a weight lifting off my shoulders. Then I knew I was going to say yes and I went to see Pauline Godfrey (Head of Discipleship and Vocations).*”

It took a while before Helen was completely confident with her decision. She said, “I describe it in terms of dipping my toe in the water to see if it’s too cold for me…now my big toe is in and it’s ok so I’ll try to get in the water… Now I’m doggy paddling. I am swimming in this water and it feels good. I can’t see the edge of the swimming pool and there’s a clear horizon in front of me. It’s been a ‘helluva ride’ but I know I’m in the right swimming pool!”

One of Helen’s favourite Bible verses is Philippians 4:6 . It says, “Don’t worry about anything; instead, pray about everything.  Tell God what you need and thank him for all he has done.”  She added, “The generosity of God makes me want to be the person who shines out Jesus.”

Helen has very real experience of answers to prayer. When her son was 17, he had encephalitis and was extremely poorly. “I asked lots of people to pray for us at that time and we saw some real answers to prayer. One of the ladies who was praying for us said to me “I’m pretty new at this, but I’m pretty good at it!” David’s resulting brain injury meant that for a time he was like a three-year-old in a 17-year-old’s body. Now he’s much improved and hoping to start university in 2022.” 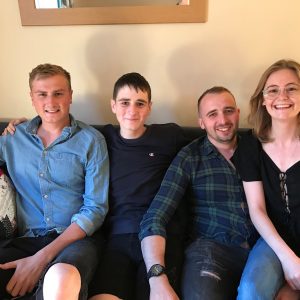 It’s part of a pattern of God’s faithfulness which Helen has known her whole life. She said, “God has been with me since my earliest years. My first memories were singing a song called “Jesus loves me, this I know” in Sunday school. I always knew Jesus was my friend and I always wanted my own kids to have that knowledge too. I love telling children that Jesus loves them – that he loves to listen to them, even when they whisper and even when they shout.”

Helen was most recently community and families pioneer at St George’s in Tuffley and has joined St James’ and Christ Church in Gloucester as a curate.

She was ordained deacon in Gloucester Cathedral on Sunday 27 June 2021.

Above, from left to right are Helen’s sons Joseph, 23, David, 19 and Matthew, 26, with girlfriend Hannah Morgan.

*If this story is stirring a calling in you, contact Pauline, Head of Discipleship and Vocations for the Diocese of Gloucester on