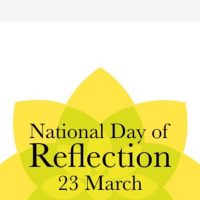 As the country marks one year since the start of the first coronavirus lockdown, people stood in silence at midday to pay their respects to those who have lost their life this year.

In Gloucester City and Hempsted, yellow ribbons have been tied to hedges, trees and railings at the three churches in the benefice as a sign of support and prayer for all who have been bereaved. A small socially-distanced service was held in the churchyard of St Swithun’s in Hempsted and was livestreamed to the village Facebook page. The churchyard hosts an outdoor ‘memorial cairn’ where more than 100 stones have been placed since All Souls Day in November to remember those who have died.

Rector of Gloucester City and Hempsted, the Revd Canon Nikki Arthy, said; “The cairn has become an important focus for grief, reflection and prayer. People have been very creative in finding different ways to mourn during the pandemic, but nevertheless I think there is still a huge amount of unexplored grief. It is really important for the Church to work in partnership with other organisations to help people process this and move forward.”

Prayers, posters and cards have also been made available for downloading by the Church of England.

The National Day of Reflection comes as the Church of England released new research on funerals and bereavement showing that the majority of people want churches to provide both indoor and outdoor spaces for quiet reflection, prayer and places to light candles for those who have died.

The online survey of more than 2,000 adults, also showed that a majority of people want the Church of England to provide a listening ear for those who want to talk about death and dying and help for people to talk about grief.

The survey showed that nearly three quarters of people – more than seven in 10 – who wanted to attend a funeral over the past year were unable to do so because of the pandemic.