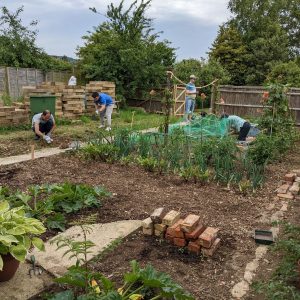 An accessible community garden at  is pulling in volunteers on part of the site of St Philip and St James Church in Hucclecote.

Begun by a small group from the church, it is now a community asset with volunteers not only from Hucclecote but also from further afield in Gloucester.

Gloucestershire Funders awarded a grant of £8,000 towards the development of the garden and, as part of the award, arranged for an audit to be carried out to recommend how to make the site and its facilities accessible to all.

Alison Dight, a member of the church, says, “We found the report has been very helpful. A priority for the grant money was to have a wheelchair-friendly path laid on the site and to improve the area near the Gordon Rooms to accommodate two disabled parking bays, both of which have been done. Money was also donated for a bench, which has been installed near the vegetable garden.”

Training sessions have been held in soil analysis and how to build raised beds.

Alison adds, “The site has been transformed into a usable and productive garden enjoyed by many. The combination of willing volunteers and fertile soil has resulted in the growth of more vegetables than we could have hoped for. We have planted, and are harvesting, peas, tomatoes, courgettes, runner beans, beetroot, radishes and onions; and are hoping that the potatoes, broccoli, cauliflowers and sprouts will cope with the heat and drought to be harvested later in the season.”

The potting shed was given a new door and windows of strengthened glass. Four raised beds have also been built, and a further 20 are being built at different heights so they can be used by those with physical challenges, including wheelchair users. There are also beds along the east boundary that are low and safe enough for children to use.

“It is a delight to see volunteers come back time and again to support us. They include four asylum seekers from Iran who are housed locally and have worked so hard in the garden to remove gravel and build the boundary beds. But we have found that there’s always something for all of us to get involved in, whatever our skills and capabilities. And we celebrated our first year with cake made from our own courgettes. Although there is still much to be done, we are delighted at the progress made and the vegetables we have grown.”

The community garden is open on Tuesdays, 10am to 12pm, and on Thursdays 2pm to 4pm.