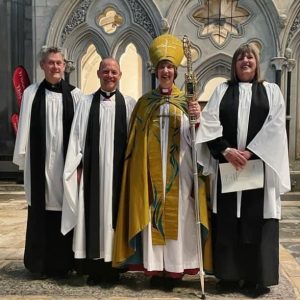 Four new Canons have been appointed at Gloucester Cathedral.

Being made an Honorary Canon is awarded in recognition of long and dedicated service to the local church. Canons become one of 24 members of the ‘College of Canons’ who work to strengthen the links between the Bishop, her Cathedral, and the parishes, and to enrich the life of the diocese.

The new Canons are:

Simon said of his appointment, “It is wonderful that the importance of university chaplaincy is being recognised in this way. I am very fortunate to be part of a tremendous team, and we are very thankful that our role is so well supported by the University. I hope that this will strengthen further the relationship between the University, the Diocese, and the Cathedral.”

Craig said, “It was a very special and humbling occasion. It was affirming to be supported by friends old and new from all stages of ministry; from theological college and all the parishes I have served. My family’s main question was are you allowed to ‘pimp your stall?’ Suggestions most welcome.” 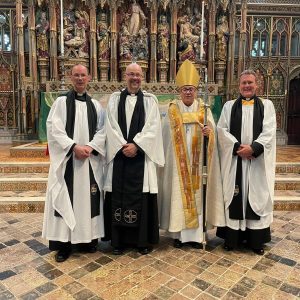 Nick said, “It was a real honour to be installed as a Canon, even on a hot day! There are a lot of encouraging things going on in South Cheltenham and I hope that this was a recognition of the way in which God is working amongst us in new ways of working between traditional church and fresh expressions, and new ways of using our buildings and inviting our community into that space and in committing to working with young people both within and beyond the church.”

Josie, Nick and Stephen were installed at the Evensong service in the Quire of Gloucester Cathedral by the Bishop of Gloucester and the Interim Dean of Gloucester on Thursday 14 July 2022, with Simon Whitcombe’s installation was on Tuesday 19 July 2022.

Josie Goodwin took up her present post as Chaplain at Cheltenham Ladies’ College (CLC) in 2017 after parish ministry in the North Cotswolds and Cheltenham. Chaplaincy at CLC enables her to combine her love for young people with a ministry to the workplace. She supports the wider life of the church as an Assistant Diocesan Director of Ordinands and Assistant Area Dean in Cheltenham. Josie maintains a constant supply of chocolate in her office to demonstrate the never-ending hospitality of God, and summarises chaplaincy to newcomers in College as being church, chat and chocolate.

Nick Davies is Team Rector of South Cheltenham where five churches span the breadth of the Church of England and include a Bishop’s Mission Order partnership. He is a member of Diocesan Synod and has previously served as Area Dean of Cheltenham, as a member of the Diocesan Advisory Committee, as a ministerial reviewer and as a training incumbent to five curate colleagues. Last year, as a member of a dedicated project board, he reopened St Philip and St James, Leckhampton, following a major reordering. In his spare time, Nick enjoys cider making using homegrown Gloucestershire apple varieties, such as Foxwhelp.

Craig Bishop is currently Team Rector of the Vale and Cotswold Edge Team, a group of 11 parishes in the North Cotswolds. He enjoys working closely with lay and ordained colleagues and delights in seeing them flourish in their ministries whilst also benefiting from their support, encouragement and wisdom. Craig has served as a member of Bishop’s Council. He is currently a member of Diocesan Synod, the Diocesan Mission & Pastoral Group and the Life Development Fund committee. The outdoors is a place of restoration for Craig and he is currently mid-way through climbing all the mountains in Scotland for a second time.

Simon Witcombe trained for the ministry at Cranmer Hall in Durham after four years working as a teacher. He served as a curate in Norwich and as an Associate Minister in Skegness. He then moved to be Rector of five parishes in central Lincolnshire centred on Woodhall Spa for 9½ years. His last parish role was serving as Vicar of Codsall near Wolverhampton for 10 years, including 5 years as Rural Dean of Penkridge. Simon has been Senior Chaplain at the University of Gloucestershire since 2017.  He finds this role very fulfilling and is delighted to work with such a tremendous team.